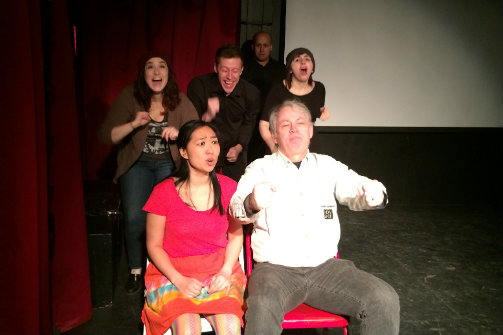 BOTTOM LINE: A funny, poignant tribute to an eccentric grandpa—and to the people who impact our young lives.

Every clan has one—the charismatic, slightly-off-center relative whose exploits become the stuff of family legend. These individuals seem magical to us as children, and their influence shapes the adults we become. Told in both flashback and retrospect, Punk Grandpa celebrates these relationships through playwright Laura Scruggs’ memories of her mischievous grandfather—and her abiding love for him throughout his descent into Alzheimer’s.

Punk Grandpa follows Scrugg’s younger self through a particularly special weekend with her grandfather in December 1981. A colorful pixie of a girl, five-year-old Laura (Becky Chong) struggles to understand the world and her place within it. Caught between the puzzling messages of school, peers, and a conservative Christian family, Laura finds a kindred spirit and an unlikely sense of balance in the antics of her impish “punk” Grandpa (Ken Coughlin). Whether flirting with bank tellers, cracking earthy jokes at church, or delighting neighbor kids with sidewalk joyrides, Grandpa’s quirks are rendered larger-than-life through Laura’s innocent perspective. The ensemble’s hilarious dance interludes, outlandish prop comedy, and montages of Scruggs’ home movies and family photos perpetuate that whimsy throughout, inviting us to experience Laura’s memories with similar awe. Like the Wizard of Oz (a reference to which Scruggs frequently returns), Grandpa’s presence brings a streak of Technicolor to the play’s dim-clad world.

Scruggs intercuts these childhood rhapsodies with heartbreaking reality as an adult Laura (Chong, again) recalls her grandfather’s battle with Alzheimer’s, her ensuing crisis of faith, and the uniqueness, enthusiasm, and warmth that survived the depths of his illness. Even after his death from Alzheimer’s-related complications, Grandpa’s influence carries through Laura’s life, from her marriage to an equally-eccentric man to her career in elementary education to her passion for the big-band swing music he adored.

While its psychedelic trappings and goofy humor delight, it’s Punk Grandpa’s honest simplicity which gives the play its real beauty. As Laura, the remarkably-versatile Chong transitions seamlessly between wide-eyed wonder and solemn reverence, never wavering in her devotion to her childhood hero. Coughlin, bearing an uncanny resemblance to Scruggs’ real grandfather, plays Grandpa with sly, understated wit and ample tenderness for his little “grandpunk." As in love and memory, Punk Grandpa magnifies and celebrates the little moments with those we cherish, honoring the idiosyncrasies that define a person and the relationships that define our lives.