On the Verge or, the Geography of Yearning

By Eric Overmyer; Directed by Laura Braza
Produced by the Attic Theater Company

Off Off Broadway, Play Revival
Runs through 7.9.16
Walkerspace, 46 Walker Street 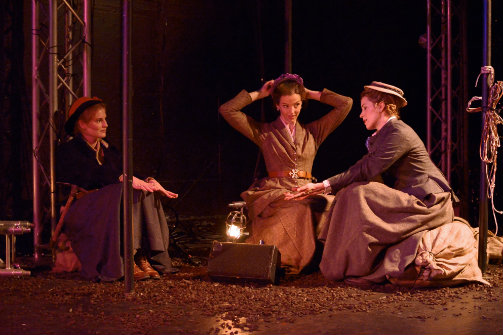 Ella Dershowitz, Emily Kitchens, and Monette MacGrath in On the Verge.

BOTTOM LINE: Highbrow fun for those who like a little mental exercise with their comedy.

In 1888, three women set off to explore terra incognita—an unknown land—but a strong sense of place anchors the Attic Theatre’s revival of On the Verge or, the Geography of Yearning, a funny and challenging play by Eric Overmyer. First produced in 1985, this intellectual romp through American politics and popular culture is currently being performed by an impressive cast in a revival that seems both timely and somewhat overdue.

If you’ve watched TV drama at all in the last few decades, you’re probably already familiar with some of Overmyer’s work: he’s written episodes for Law & Order, Homicide and The Wire, among many others. But On the Verge has little in common with a police procedural. Its central characters—artistic Alexandra (Ella Dershowitz), romantic Fanny (Emily Kitchens), and scholarly Mary (Monette Magrath)—are indeed engaged in an investigation, but their focus is on adventure, not crime. All three are experienced and daring world travelers, marking them out as exceptional for their era.

This journey, however, is different. As the women fight their way through dense jungle in their confining corsets and skirts, they encounter a series of unfamiliar objects. They find themselves using words and phrases they then can’t explain the meanings of. And the people they encounter on the way speak of strange machines like “dirigibles” and “choppers,” wearing odd clothing that leaves the globetrotting ladies baffled. There is some danger that the play will leave audiences baffled as well: written thirty-plus years ago, the text is full of references to historical events and cultural touchstones that might not mean that much to people born at the end of the 20th century.

However, for those familiar with the diction and customs of their grandparents’ era, On the Verge is a delightful puzzle that shares theatrical DNA with such works as Caryl Churchill’s Cloud Nine and Tony Kushner’s Angels in America. The cast (completed by William John Austin, playing his multiple roles with finesse) does a fine job of defining and differentiating their characters so that even among all the twists and turns, we are invested in the voyage. Director Laura Braza guides her actors skillfully through a complex world evoked on a modest stage.

Fans of dramatic television are no doubt glad that writer Overmyer made a career change, but On the Verge weaves a mystery that doesn’t resolve neatly in an hour. Be prepared to laugh one minute, then furrow your brow the next. This rare and groundbreaking play, concerned with history and women’s space within it, is worth the trip.

(On the Verge plays at Walkerspace, 46 Walker Street, through July 9, 2016. The running time is two hours with an intermission. Performances are Tuesdays through Saturdays at 7 and Sundays at 5, with added matinees on Saturday 6/25 and 7/9 at 3 and no performance on Sunday July 3. Tickets are $25 and are available at smarttix.com. For more information visit theattictheaterco.com.)

On the Verge or, the Geography of Yearning is by Eric Overmyer. Directed by Laura Braza. Scenic Design is by Julia Noulin-Mérat. Costume Design is by Emily Rosenberg. Lighting Design is by Daniel B. Chapman. Sound Design is by Beth Lake. Production Stage Manager is Will Chaloner.