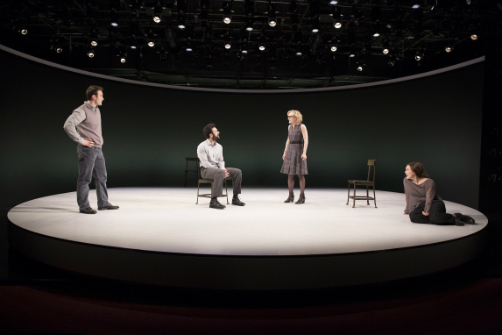 Much like Constellations, Incognito is not a traditionally told story, rotating through more than three different plotlines. The ensemble cast of four consists of Tony Award nominee Geneva Carr, Daredevil’s Charlie Cox, Heather Lind, and Morgan Spector, all of whom can hold their own in a battle of wits.

Carr and Cox, in particular, are truly compelling in their distinctive characters for each story line, which they rotate through with ease. Payne’s dialogue is quick and clever, adding an unexpected humor to a play which is largely about science.

Navigating multiple characters in one play is not an easy task for an actor. Luckily, all four actors have impressive stage chops, as they tackle 20 roles in total, telling multiple threads and stories. Each plays between 4 and 6 roles, including Thomas Harvey (Spector), the pathologist who performed Albert Einstein’s autopsy and then stole his brain; Martha (Carr), a neuropsychologist who is dating a woman after her divorce; and Henry (Cox), a patient who suffers memory loss after undergoing a surgery for epilepsy. (The playwright’s note reminds us that the play is fictional, despite being loosely based on true stories.)

Designed by Scott Pask with lighting by Ben Stanton, the set is relatively simple, as the actors stand on a round platform in the center of the black stage, allowing the audience to focus on the people and the storytelling without distraction. Kudos are owed, as well, to director Doug Hughes, who ably separates each thread of story, allowing us to follow the action of the play without getting confused, in addition to keeping a steady and rapid pace.

Especially considering the challenge of multiple threads of story, Incognito is very engaging, with compelling characters and plot. As with Constellations, the scientific perspective requires much of your brain as an audience member, as the play is more intellectual in tone than the average play on the New York stage. Which in itself, is not a negative. I personally like plays that require my entire attention span, and I found Incognito to be a satisfying intellectual experience, if not an emotional one. (Those who saw Constellations will also recognize Payne’s use of dialogue repetition, though it isn’t nearly as effective here.)

I wonder, though, if all this neuroscience really adds up to a satisfying story. It’s entertaining to watch as all four excellent actors fire on all cylinders (not to mention the extensive number of accents each of them have mastered), but I’m not sure what Payne wants us to take away. It’s certainly possible to tackle the larger intellectual themes that Payne is interested in (for example: string theory) and still come away with a satisfying emotional journey, as in the end of Constellations. But due to the nearly overwhelming number of characters, Incognito feels like an exercise more than a fully formed play.

Despite my qualms about the play itself, an unsatisfying play by Nick Payne is still better than many other new plays; I just wish he wouldn’t rest so much on scientific chatter to do the dramatizing for him.

(Incognito plays at New York City Center Stage 1, 131 West 55th Street, through July 10, 2016. The running time is 90 minutes with no intermission. Performance schedule varies. Tickets are $90 and are available at nycitycenter.org or by calling 212-581-1212. For more information visit incognitoplay.com.)

Incognito is written by Nick Payne and directed by Doug Hughes. Movement is by Peter Pucci. Set Design is by Scott Pask. Costume Design is by Catherine Zuber. Lighting Design is by Ben Stanton. Sound Design and Original Music is by David Van Tieghem. Production Stage Manager is Catherine Lynch.