In Between Silence, where we really exist

Devised and Directed by Stano 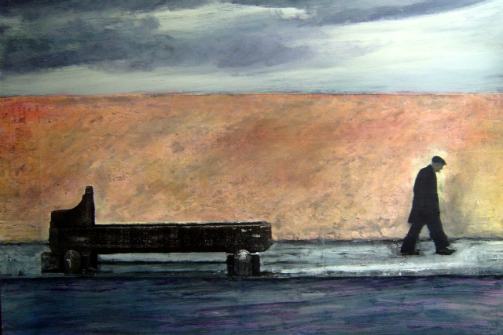 Artwork for In Between Silence, painted by Brian Palm

BOTTOM LINE: In Between Silence, where we really exist is a sensory experience and a master class in storytelling, using beautiful soundscapes to subtly underscore the beautiful complexity of the human experience.

I have always been of the frame of mind that nobody has quite managed to master the art of storytelling as skillfully as the Irish. For some reason, the importance of language, legacy, and oral tradition passed down through generations just seems to ring exceptionally true and deep when tied to the Emerald Isle. In Between Silence, a sensory multimedia experience developed and directed by self-proclaimed “Song Poet” Stano, reinforces this belief.

It almost feels like a disservice to the piece to try to classify it as one thing or another; there are elements of film, sound, spoken word, music, and many, many nuances of these elements along the way. Though there is a film screen at the front of the theater, it is completely black the majority of the time, and the audience is engulfed in darkness. From this haunting, beautiful stillness, unable to see, we get the immense privilege of hearing eleven stories, gorgeously spun by storytellers across the world, accompanied by original musical soundscapes from Stano himself.

The stories range from hysterically funny to poignantly tragic, and everything in between—family deaths, loss of innocence, political turmoil, and a particularly amusing anecdote about going for a dip in New Jersey and being carried straight into Manhattan by the Hudson River, losing your clothes along the way. However, the one thing that connects each tale with the next is the ability to transport the listener into not only its geographical location, but also its emotional climate. Each story draws the extraordinary from the ordinary, and, as producer/storyteller Denise Dunphy said to me after the screening, what makes these stories so moving is their relatable simplicity. These are real people’s stories, “regular” people’s stories, but this does not in any way negate their beauty and depth.

The process of conception and creation for this piece was in no way standard, and follows Stano’s long history of artistic experimentation and originality. Each storyteller relayed their tale in a recording studio while listening to a semi-improvised collaborative piece of music, developed by Stano and a group of collaborative musicians, and responding to what the music gave them. The music was not planned for the story, nor the story planned for the music, which resulted in unexpected pairings and responses.

Though at times some of the musical pieces seem to blend together tonally, that tone is by no means ineffective. It somehow manages to highlight the melancholy in the positive, the positive in the melancholy, the chaos in peace, and the peace in chaos. The improvisation-based process taken in molding this show was intended to yield unique responses, unique combinations of word and tone, and it definitely does.

I had no idea what to expect when entering the theatre to experience In Between Silence, probably primarily due to the fact that it is incredibly difficult to put into writing exactly what it is. So instead of trying to define or contain it, something I view as nearly impossible, I will simply say this: expect to get to know people—real people; expect to be moved; expect to use all your senses, but above all, do not confine yourself to the limits of expectation.

(In Between Silence, where we really exist plays at Barrow Street Theatre, 27 Barrow Street, through December 13, 2016. The running time is one hour and ten minutes without an intermission. Remaining performances are Saturday at 3 and 5, Monday at 9, and Tuesday at 9. Tickets are $8 and are available at barrowstreettheatre.com or by calling 212-243-6262. For more information visit stanoarts.com.)

In Between Silence, where we really exist is devised and directed by Stano. Produced by Denise Dunphy.