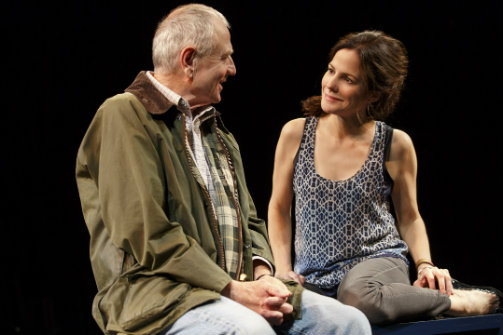 BOTTOM LINE: A simple yet immensely powerful story of two people finding love and purpose in the most unlikely of places.

We’ve all heard the age-old adage, “It was love at first sight.” After rolling our eyes and dismissing the phrase as something that's only real in the world of romantic comedies, what if we stopped for a second and considered if such a thing could really happen? Furthermore, could two people from seemingly opposite ends of their lives meet and somehow feel more connected with each other than anyone else? Playwright Simon Stephens examines this romance cliché in his new play, Heisenberg, playing now at the Samuel J. Friedman Theatre.

The play begins, as most love stories do, in a particularly unremarkable setting—in this case, a London train station. Forty-something-year-old Georgie Burns (Mary-Louise Parker) happens upon an elderly gentleman by the name of Alex Priest (Denis Arndt). It’s obvious almost immediately that, while these individuals couldn’t be more different, an almost palpable connection is established between them. Stumbling over their words and initially unable to find much common ground, the two eventually connect in a way that feels almost familiar—as if they are somehow kindred souls lucky to have been reunited.

Parker is loveably neurotic from the moment she hits the stage. Presenting us with a woman at her wit’s end, desperate to find her estranged son, Georgie is the physical embodiment of an individual living in extremes. Every line is delivered with an almost desperate air—wide-eyed, frantic, with an uncertain quality that shoots for the best and takes what she can get. At one time a woman who had it all, Georgie now lives alone, hungrily searching for something worthwhile to hold onto. Without giving anything away, we learn by the play’s conclusion that her intentions are anything but innocent, but there’s no denying that what Georgie wants above all is to love again.

Arndt is the delightful yang to his co-star’s yin. He is grounded, wizened by his physical age and experiences in life, and yet seems just as desperate to make a connection as the woman in the train station with him. Living an endless routine of waking up, working without a break in his butcher shop, and going for the same hour and half walk every day, Alex knows deep down that what he needs is a companion to shake up the life he’s trapped himself in, and learn to live again. Almost everything he says is delivered with a tinge of sadness that is both tragic and incredibly endearing. Georgie and Alex each draw attention to his internal countdown—ultimately emphasizing the idea that life is short, and that Alex shouldn’t pass on what could be the best thing to happen to him for the rest of his life.

From there the play progresses in a series of sequential scenes over the course of a little over a month. Georgie and Alex begin what might be the most awkwardly constructed relationship ever observed. We witness their first date, their first time making love, and ultimately their decision to recognize officially that they have something special that only happens for the very fortunate.

Heisenberg isn’t a play that relies on over the top theatrical effects. It doesn’t crutch itself on snazzy scene changes; it doesn’t showcase the most impressive lighting or sound design ever devised for the theatre. Instead, it returns our attention to what should be most important to us—simple, beautiful, human connection. Director Mark Brokaw has given two gifted actors the freedom to take the most basic stage setup (a completely barren stage, save two tables and two chairs) and completely capture our imagination in a world where two beautifully polarizing people can have the sweetest, if not most complicated, connection imaginable.

In an age where mega-budget production like Hamilton, Holiday Inn and Long Day’s Journey Into Night have reigned supreme, it’s a welcome change of pace to experience a play where the main focus is performance. Parker and Arndt are two sure contenders for accolades in next year’s Tony season, making Heisenberg an evening of theatre you don’t want to miss.

Heisenberg is by Simon Stephens. Directed by Mark Brokaw. Choreography is by Sam Pinkleton. Scenic Design is by Mark Wendland. Lighting Design is by Austin R. Smith. Sound Design is by David Van Tieghem. Costume Design is by Michael Krass. Dialect Consultant is Stephan Gabis. Stage Manager is James FitzSimmons.

The cast is Denis Arndt and Mary-Louise Parker.