Conceived and Directed by Drew Weinstein
Part of SubletSeries@HERE 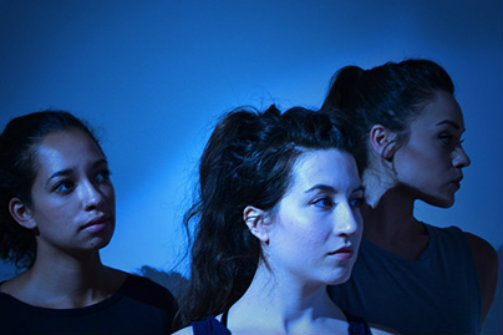 Actors in HEDDA. Photo by Katy Newton and Yukino Kondo.

BOTTOM LINE: A new adaptation of Hedda Gabler incorporating works by a lineage of artists driven to madness by the society they lived in.

Weinstein’s production follows the original plot of the Ibsen classic. After marrying academic George Tesman, the aristocratic Hedda Gabler is miserable with discontent and has little interest in her husband or her married life. Throughout the play two things become apparent: Hedda is pregnant, and she is desperate for something extraordinary to happen. Her old schoolmate Thea Elvsted comes bearing news about Ejlert Løvborg, Hedda’s old lover and Tesman’s academic rival. Løvborg is a reformed alcoholic and has recently written what is believed to be a masterpiece. In a drunken stupor, Løvborg loses the manuscript. Disgraced and desperate, Løvborg confides in Hedda; she then gives him her pistol and encourages him to commit suicide, telling him to make his death “beautiful.” Judge Brack, a family friend of the Tesmans, recognizes Hedda’s pistol, and reveals Løvborg’s death, telling everyone that Løvborg has shot himself in the chest. However, when Hedda is left alone with Brack, he tells her that Løvborg’s death had been caused by a misfire, and his wound was in the bowel rather than in the chest—hardly the beautiful death Hedda imagined. Furthermore, the secret of the pistol means that Hedda is now at Brack’s mercy. Unable to bear the entrapment, Hedda kills herself.

The chaotic nature of the protagonist is literalized in Weinstein’s new conceptualization: two actresses, Marielle Renee and Maggie Thompson, embody a multitude of dualities in Hedda's character, demonstrating the palpable tension between Hedda's two extremes. At times their rivalry seems to be that of Dr. Jekyll and Mr. Hyde. They observe each other, reacting to each other’s behaviors and decisions. They despise each other, circling around, battling each other, and sabotaging the other’s plans. Yet they also suffer the same pain as each other, and cannot exist on their own. Their identical costumes and choreographed movements create a striking image for the audience to behold.

While Renee’s Hedda remain comparatively poised and dignified, maintaining a visage of a hostess, Thompson’s Hedda looms like a shadow, with a far darker disposition, manic and dangerous. They are the Ying versus the Yang, the trophy wife versus the femme fatale, the ego versus the id, the reason versus the compulsion. Throughout the play Thompson’s Hedda becomes increasingly powerful, like the dark side of Hedda’s character creeping up and eventually takes over her entire being, which results in the inevitable destruction.

The director remarks, “In many ways I see this piece as an ode to the dreamers who never seem to find their footing in the world. I am fascinated by the deep seated contradictions that define these beautiful souls who are much too large for the society we exist within.” Through the scope of Hedda Gabler, this production examines the inability to compromise of an almost Byronic heroine. Hedda is never made out to be one to be idolized, yet she is still sympathetic; she's riddled with flaws yet never stops making decisions that are completely her own. Her complexity makes her fascinating and continuously magnetic. In Weinstein’s conception, Hedda represents a call of the wild, an archetype of those who are destined to be misunderstood. Hedda is all the women, as well as men, throughout history, out of their time and out of their place, desperate to be heard.

As Ejlert Løvborg, Joe Pietropaolo is a highlight of the show, portraying the troubled academic with beautiful nuances. The interaction between Løvborg and Hedda (Marielle Renee) in Tesmans’ living room is one of the most simplistic and breathtaking scenes in this production. Yet HEDDA might benefit from a more cohesive style. The dialects used here are not unified, which becomes distracting. And while there is a clear attempt to have period-appropriate costumes and props, even a more modernized design wouldn’t take away any of the elements in the original story.

HEDDA would also benefit from some rewriting and a clearer structure that better separates the different layers in this multi-universe of a play. Weinstein makes a bold move with this piece, which holds the potential to be a remarkable reevaluation of Hedda Gabler and an exploration into the human psyche that’s relevant today, especially given our modern society where constant distractions help create a somewhat distorted perception of self.

(HEDDA played at HERE Arts Center, 145 Sixth Avenue, September 8-11, 2016. The running time was about 90 minutes with no intermission. Performances are Thursday to Saturday at 7, and Sunday at 5. Tickets were $15. For more information visit here.org.)