Off Off Broadway, Play
Runs through 10.9.16
Soho Playhouse, 15 Vandam Street 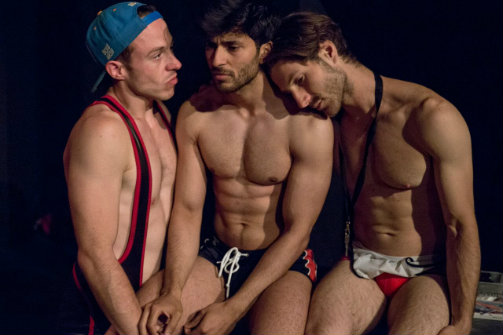 BOTTOM LINE: A disquieting exposé that attempts to both tell and show what happens in the gay subculture of chill-out sex parties.

Gay sex parties—for the uninitiated, the idea might seem mysterious, lurid, even mythic. Do such things really happen? They do, and they’re more common than you might expect. In 5 Guys Chillin’, writer-director Peter Darney aims to open the world of the gay sex/chill-out party to a wider audience, in as authentic a way as possible. Using actual interview transcripts from guys he met on Grindr and other gay apps, Darney constructs a play that is a cross between documentary theatre and performance piece.

5 Guys Chillin’ is underway even as the house opens. J (Rick Yale) is in his London flat, prepping for the night to come—setting out the lube and sex toys, laying out the drugs, and checking online to see who is coming. The first to arrive is J’s friend M (Cesare Scarpone). As the lights dim, R and B (Elliot Hadley and Richard De Lisle) arrive, a couple who, we soon learn, is really part of a throuple (their third prefers to stay at home). Last is PJ (Adi Chugh), a Pakistani who seems shy at first…but not for long.

All manner of topics are discussed: racism, STIs, and fisting. What behavior is acceptable, and what isn’t. Is this a sex party or a chill-out (where drugs are the focus), and which is better? Indeed, there’s a lot of talk about drugs: which ones people take (X, G, and Tina, to name a few), what their effects are (see the glossary in the program for additional info), and what can happen when people go overboard. And there are also many personal stories—about coming out, the emotional and sexual complexities of gay relationships, and some of the most graphic (some might say gross) truth-telling I’ve ever seen on a stage; if it wasn’t clear already, this is NOT a show to see with your mother.

Throughout this conversation the five guys continue to act like they would at a sex party—they change into “more suitable” clothing (in front of the audience, but there is no frontal nudity), do drugs (a lot of drugs), and periodically caress each other and make out. While there are only a few moments of (simulated) sex, at two points the lights dim to a red glow, the music gets louder, and the guys come together in a transcendent erotic dance (Chris Cuming is credited with movement) that is perhaps the closest theatre can get to a sex party without veering into the pornographic. These moments—a highlight of the show—provide a glimpse into what this piece could become were it not hampered by a devotion to the literal.

The problem here is that this is really two plays in one. While the story the guys are telling would seem a perfect fit for the story they act out—both concern the truth of what happens at sex parties—these two stories don’t mesh well, and the conflict persists throughout. When one character asks “what are the rules for a sex party?” you can hear the voice of the interviewer coming through. It’s as if you watched someone ride a roller coaster, but instead of screaming, they talked about their past coaster experiences, how they avoid the lines, and who they like to ride with. At one point PJ relates a deeply personal story about familial expectations and why he’s now married and has a child—as good as Chugh is here, such introspection (not to mention discussion of women and kids) feels markedly out of place in such a homoerotic, drug-fueled environment.

All five actors give passionate performances, and do much to make the dialogue fit as well as it can in this setting. Given that some of the characterizations shift over time (I’m guessing material from multiple interviewees was used to create each character), this ensemble cast is to be commended. And if sometimes the actors “act the drug” right after taking it, only to lose all traces of their high a few minutes later, the consistency and ease of their embodied casual intimacy feels quite real for an event where socializing freely mixes with sex.

One of the benefits of verbatim theatre is that controversial subjects can be presented more or less objectively: the material Darney has gathered is often refreshingly candid, and even when the guys discuss their willful disregard for safer sex practices, 5 Guys Chillin’ often manages to portray the scene without quite judging it—a rare feat. Until the end, that is: 5 Guys Chillin’ culminates in one of the most intense images I've seen in a long, long time, a tableau of depravity that doesn’t end even after the house lights come up and the audience leaves the theatre. It’s as if Darney wants to make sure we won’t forget that this disturbing scene could go on forever; after an hour of hedonism it’s a sobering sight—for the audience, if not the characters.

(5 Guys Chillin’ plays at the Soho Playhouse, 15 Vandam Street, through October 9, 2016. Running time is 1 hour with no intermission. Remaining performances are Wednesday and Thursday at 9:30, Friday at 9, Saturday at 5 and 9, and Sunday at 5. Tickets are $30; $45 for VIP (front rows and a cocktail). For more information and to purchase tickets visit sohoplayhouse.com.)