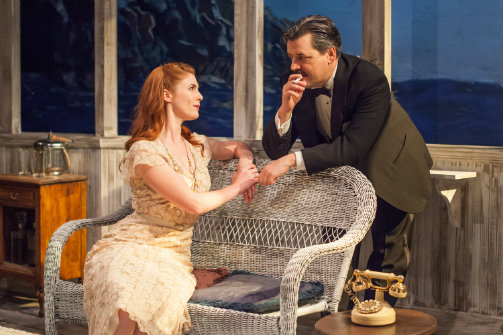 Mary McNulty and Kelly Cooper in End of Summer. Photo by Vadim Goldenberg.

BOTTOM LINE: A comedy-drama that revolves around unemployment, the nature of wealth, and female independence, End of Summer transports us to a 1930s that feels vaguely reminiscent of our present moment.

The year is 1936, and everything is darling, chic, and absolutely marvelous. At least, so it appears at the Frothingham-Wyler estate, an opulent seaside property sequestered from the rest of the world. Outside the cream-paneled walls of this Maine cottage, the Great Depression haunts the rest of the country, looming over the proletariat.

Such contrast between the wealthy elite and the working class takes center stage in S.N. Behrman’s family drama End of Summer. We meet three generations of women: Mrs. Wyler (Sarah Saltus) is the dying matriarch who is cared for by daughter Leonie Frothingham (Erin Beirnard), and granddaughter Paula Frothingham (Mary McNulty). Paula is set to inherit the family fortune, an inauspicious circumstance that threatens to undermine her relationship with her beau, Will Dexter (Andrew Bryce). Despite his affection for Paula, Will, a hardworking Amherst student with no superfluous wealth, despises Paula’s luxurious world. He and his partner-in-crime Dennis (David Friedlander) are "radicals" who stand for the impoverished and disenfranchised populous. For her part, Paula wants desperately to distance herself from such a grandiose lifestyle, and she struggles to break from her mother Leonie’s anti-female-independence attitude. Along the way, we meet other major players, including Paula’s father Sam Frothingham (Michael Hardart), who has come to officially file for divorce from Leonie. We also encounter Leonie’s suitors, Freudian psychoanalyst Dr. Kenneth Rice (Kelly Cooper) and Russian aristocrat Count Mirsky (Brian Ott).

It is said that money makes the world go round, but not in this family. Instead, wealth feels like an explosive, teetering precariously on a ledge and threatening to destroy every relationship in its path. It commandeers the future of Paula and Will’s romance, it is the driving force behind Dr. Rice’s presence at the estate, and perhaps most significantly, it illuminates stark generational contrasts. As we watch these compatriots interact, it becomes evident that money is the driving force behind every character’s actions.

There is much to praise in director Alexander Harrington’s production. The ensemble work is strong, with standout performances by McNulty, Friedlander, and Hardart. Harrington’s pacing has a delightful musicality—structured in three acts, End of Summer relies on swift entrances and exits as characters play scenes in various permutations of duos and triplets. Harrington achieves this effect very well, so that this little veranda room resembles a revolving door of drama. I further commend Harrington and his team on the meticulous construction of our visual world: with a largely neutral palette emboldened by occasional pops of color, set designer Cao Xuemei and costume designer Sidney Fortner transport us to the 1930s. Seated on three sides of the stage, we look onto the veranda, lined with large bay windows that capture the illustrious natural world beyond—the rocky seashore and bright blue skyline. A white and blue striped carpet (reminiscent of classic seaside accoutrement) adorns the floor, and atop sits crisp, white wicker furniture. Characters glide around in dresses and mis-matched suits of browns, whites, tans, and muted yellows with the intermittent burst of burgundy or turquoise. Such care to detail paints a sumptuous picture of a charmed 1930s life.

There are a few shortcomings that disrupt an otherwise strong production. Behrman’s script lays out very clear character objectives, but these intentions sometimes disappear, rendering it rather unclear who wants what and why. Moments of line fumbling added to this ambiguity, making it difficult to follow some of the action. Nonetheless, I am sure as the show progresses in its run, the production will tighten.

Kudos to Metropolitan Playhouse for remounting a piece that continues to resonate in a twenty-first century context. With older works situated within a classical canon, audiences might expect to sit back and enjoy the old-fashioned charm of archaic attitudes. This is not so with Behrman’s script, and I appreciate that Metropolitan Playhouse recognizes its relevance. I sat chuckling to myself about the familiarity of the young generation bemoaning the pangs of unemployment and at Paula's struggles to assert her independence as a woman. And lines that should seem ridiculously outdated are somehow, perhaps absurdly, quite topical. Hearing Leonie ask earnestly “are things better because women vote?” just days after #Repealthe19th was trending on Twitter (in response to a poll that Trump would win if women didn't vote) was a poignant reminder that 2016 may have more in common with 1936 than we might like to believe.

(End of Summer plays at The Metropolitan Playhouse, 220 East 4th Street, through November 6, 2016. Running time is 2 hours and 30 minutes, with one intermission. Performances are Thursdays through Saturdays at 7:30; Sundays at 3. Additional performances on Wednesdays at 3: October 26 and November 2; and Saturdays at 3: October 29 and November 5. Tickets are $30 and are available at brownpapertickets.com. For more information visit metropolitanplayhouse.org)