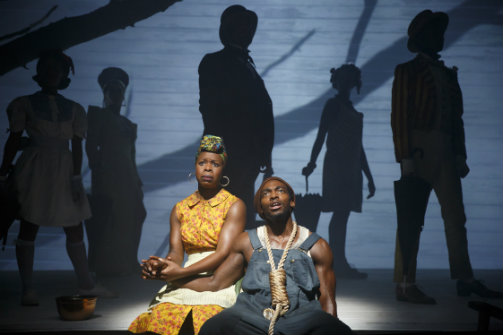 Roslyn Ruff and Daniel J. Watts in The Death of the Last Black Man in the Whole Entire World AKA the Negro Book of the Dead. Photo by Joan Marcus.

BOTTOM LINE: An aesthetically stunning and emotionally evocative piece sure to resonate in the wake of a charged election, The Death of the Last Black Man in the Whole Entire World AKA the Negro Book of the Dead is a must-see.

We begin in silence—a black man in overalls sits slouched downstage center, as a procession of black archetypal figures takes the stage in preparation; there is a story to be told. Suzan-Lori Parks’ The Death of the Last Black Man in the Whole Entire World AKA the Negro Book of the Dead follows Black Man With Watermelon (an affecting Daniel J. Watts) and his wife, Black Woman With Fried Drumstick (a sensational Roslyn Ruff), as they—and we—endure Black Man With Watermelon’s death, as he is murdered over and over again.

Pulitzer-winner Parks developed this play in 1990, and the piece was as urgent then as it is now. Twenty-six years following its original conception, we understand Black Man With Watermelon as not only emerging from a long lineage of violence against bodies of color, but also a prescient warning of the brutality yet to surface: Trayvon Martin, Oscar Grant, Michael Brown, Eric Garner, Tamir Rice, Freddie Gray, Philando Castile, Alton Sterling, and so many other nameless, faceless individuals. Thus, Parks presents Black Man With Watermelon as an archetype for all who have come before and those yet to come, but at the same time she challenges these brazen one-for-all representations, suggesting that such a designation is reductive and inconclusive.

Parks’ stunning piece is a non-linear story told not only through words but through a lively vocabulary of breath, percussion, gesture, music, and dance. The characters speak in rapid spurts of language, one right after the other. Not every line can be digested, and we receive the plot in segmented bits, racing to keep up as characters spout fragmented language. The mood switches constantly and rapidly: without much warning, we oscillate from hushed, harrowing, and solemn scenes to moments of Dionysian celebration, full of light, music, and energy. Ever so brilliantly Parks flips on a dime, as somber moments are abruptly interrupted by humor and vice versa. Amidst this world, there is tremendous pain, but there is also joy and liberation.

In the exceptional hands of director Lileana Blain-Cruz, Parks’ script shines. The scenic design (Riccardo Hernandez) is simple and striking, brought to life by a talented, cohesive ensemble performance. White wooden slats line the back wall of the stage and frame the proscenium. Downstage is a lowered playing area covered in dirt, adorned with two wooden chairs, a small wooden table, and a broken branch affixed with a noose; this is terrain predominantly occupied by Black Man With Watermelon and Black Woman With Fried Drumstick. Beyond the trench is a raked platform, and its centerpiece is a long, suspended tree branch that spans the length of the stage. Together, Parks’ content and Blain-Cruz’s directorial choices transport us to a dream space, a liminality that is as beautiful as it is frightening. In one scene, we witness a disturbing lynching that is made poetically visceral by Blain-Cruz’s staging: as Black Man With Watermelon describes rain soaking his hanging body, we see, feel, and smell a soft mist rolling through the chorus of onlookers and slowly onto us. The ensemble faces the gruesome scene upstage, grasping black umbrellas and standing in silent solemnity, as Black Man With Watermelon narrates his own execution.

In one of the many instances of Parks’ adept equivocation, we are constantly told, “You should write that down. You should write that down and you should hide it under a rock.” To the white community, she critiques the shameful misdeeds of black history usurped and defined by white writers; and to the black community, Parks champions a reclamation of what has been wrongfully stolen and encourages a jubilant celebration of tradition. But as this production suggests, stories cannot be inscribed through writing alone—they must be danced, sung, and infused with rhythm, soul, and music. Consequently, it feels like a disservice to attempt a description of this masterpiece; it simply begs to be experienced.

The Death of the Last Black Man in the Whole Entire World AKA the Negro Book of the Dead is written by Suzan-Lori Parks. Directed by Lileana Blain-Cruz. Scenic Design is by Riccardo Hernandez. Costume Design is by Montana Blanco. Lighting Design is by Yi Zhao. Sound Design is by Palmer Hefferan. Projection Design is by Hannah Wasileski. Wig Design is by Cookie Jordan. Aerial Effects are by Paul Rubin. Choreography is by Raja Feather Kelly. Stage Manager is Terri K. Kohler.