Off Off Broadway, Play
Runs through 9.27.16
Soho Playhouse, 15 Vandam Street 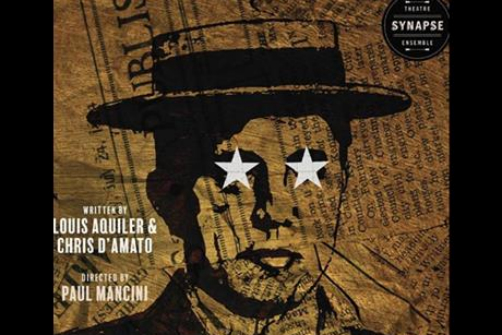 BOTTOM LINE: An ambitious—if flawed—modern attempt at telling the story of “The Crime of the Century,” including sex, drugs, and murder.

How many chances should a person get? In Dementia Americana, the history-inspired play by Louis Aquiller and Chris D’Amato, the answer is clear: for a certain echelon of society, many. This is a problem. Chronicling the infamous 1906 trial of Harry Kendal Thaw for the murder of the architect Stanford White, the show explores the dangerous allowances American society gives members of its privileged upper class, while also attempting to vindicate Evelyn Nesbit, the woman caught in the middle of the whole affair. Despite heavy-handedness and a certain lack of finesse, Dementia Americana is well received in a contemporary moment of billionaire politicians and celebrity culture. If only it trusted its audience to come to this conclusion themselves.

Social critics agree that we are currently experiencing a second gilded age in the United States. Sillicon Valley moguls and mega-millionaire playboys are perfectly held in parallel with the turn-of-the-century society gentlemen of New York, amongst them the mustachioed Stanford White (Kenneth Robert Marlo, played with nuanced skill) and the psychotic sociopath Henry Thaw (Chris D’Amato, played with an enthusiastic—if broad—gusto). Called “The Crime of the Century” by newspapers and made famous in movies and Broadway shows, the story of these so-called gentlemen and their relationships with beautiful chorus girl Evelyn Nesbit is the stuff of Society Page legend. Dementia Americana begins with the notorious murder, in which Thaw shot White three times in the head in public view atop the Madison Square Tower during a performance. With the help of the fourth wall-breaking psychoanalyst Dr. Rollo May (David Shaw)—inserted by the playwrights, as the historical Dr. May would not be born for another twenty years—we are led back into the tides of history, learning along the way that the wealthy, eccentric, and murderous Thaw, heir to a wealthy Pittsburgh fortune, had begun a dizzying courtship with the beautiful Nesbit.

Dementia Americana is not lacking in a cast of committed actors—though the acting is uneven, everyone clearly is giving their all to create this demanding show. There are moments of both poignancy and levity; some of the best scenes of the show come from the double casting of Rachel Pearl as both Harry and Evelyn’s mothers and Lizzy Ana Lincoln as both defense and prosecution lawyers in the trial. It is both entertaining and compelling to see the slight tonal and physical shifts these two actors use to morph between their roles. Evelyn Nesbit (Kari Buckley) herself, the 18-year-old ingénue, is both innocent and bold, but, much like the character herself, is held victim by a script that casts her as the tragic damsel in distress. Chris D’Amato portrays the psychotic Thaw with frenetic intensity, vacillating between psychotic babbling, uncontrollable rage, and a sometimes jarringly endearing sweetness.

As part of the Fringe Encores series, Dementia America received recognition for playwriting excellence during the 20th Annual New York Fringe Festival this past August. It certainly represents an enthusiastic ambition that is the hallmark of the Fringe Festival. As such, it is best enjoyed by audience members who are looking for a work in progress, rather than a completely polished piece. The show—to its benefit—has made some changes since its initial run in the festival, including tightening the script. We now understand more clearly the motivations behind Thaw’s murderous obsession (he has daddy issues) and have a better sense of why Nesbit stayed with such deplorable men (her father left the family in poverty). However, there is still work to be done. Director Paul Mancini would do well to find more opportunities to keep the pacing strong during the many scene changes, which often felt long and brought the energy of the show down.

Well-researched and factual, the script does its due diligence to tell the story in a straightforward manner. It is unfortunate, then, when the show ultimately fails to trust itself. We learn that Thaw successfully bought public opinion, and bribed the justice system to excuse his many crimes, with the defense of dementia Americana, the titular (and imaginary) condition in which temporary insanity is caused by a desire to defend a woman’s honor; the show then makes the heavy-handed point that it is ultimately we—the public—who suffer from the disease. The message comes across as so moralizing and explicit that it dulls its own impact. The show lectures but offers no hope, standing in judgment of our social fabric. The party, rightfully but not gracefully, comes to a screeching halt.