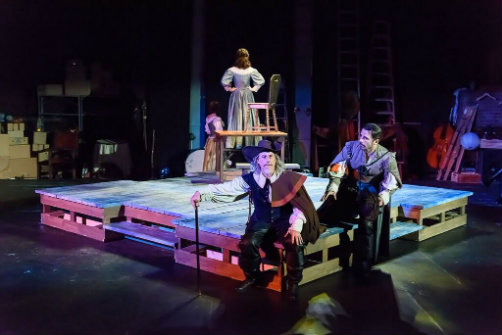 Cyrano de Bergerac was written in 1897 by Edmond Rostand, loosely based on a real person (a novelist, playwright, epistolarian and duelist) of the same name who lived in France from 1619-1655. In this play, Cyrano de Bergerac, a cadet (a nobleman serving as a soldier) in the French Army, here performed by Tony Award nominee Gabriel Barre, is a confident, strong-willed man of many talents. Not only is he a gifted duelist, he is also a great poet and has a sharp musical ear. Cyrano demonstrates his multi-talented skills in Act I when he duels with Viscount Valvert (Rin Allen) while composing a ballade. The duel match is a superb scene under the action direction of Rick Sordelet. Cyrano defeats Valvert in this match and confesses to Le Bret (Louis Tucci) his love for a beautiful and intellectual Roxanne (Bridget Saracino). The only drawback Cyrano has is that he is born with an unusually large nose, which he is very self-conscious about and believes his ugliness denies him the dream of being loved.

Soon, Roxanne’s duenna (Rin Allen) arrives to ask where Roxanne may meet Cyrano privately the next day. Cyrano is overjoyed.  Lignière (Alexander Sovronsky) is brought to Cyrano after they learn that one hundred hired thugs are waiting to ambush Lignière on his way home because of a song he composed that made fun of a nobleman. Cyrano vows to take on the entire mob single-handed, and leads a procession of officers, actors and musicians to the Porte de Nesle.

Cyrano shows his superior dueling skills again and defeats the thugs.  However, when he meets Roxanne he sadly learns that she is in love with a handsome young cadet named Christian (Luke Darnell). Roxanne asks Cyrano to befriend and protect Christian, and Cyrano agrees. In the next scene, Cyrano finally meets Christian and Cyrano reveals to him that Roxanne expects a letter from him.  Christian is discouraged by this thought, because he confesses that he has no eloquence in writing and lacks intellect and wit. Cyrano offers to write the letter for Christian. The two of them come up with a plan to win Roxanne's heart.  This is where the fun begins—Christian as the face of the lover, and Cyrano as the soul.

Cyrano and Christian decide that only in partnership will they be able to win Roxanne’s heart, but this partnership cannot last forever. The ending is full of surprises, a bittersweet drama.

This is a highly entertaining production immersing the audience in 17th century France with beautiful verses, sounds, music, a rich variety of costumed characters and props, and even breads for the actors on the dining table. For example, a food-seller (Saracino) comes to the audience to sell pomegranates (grapes); a realistic dueling match between Cyrano and Viscount Valvert; actors distribute blankets to the audience surrounding the stage during a starving cadets scene.

The set is simple with a movable stage in the center, using basic items like a cloth canvas as silhouettes. It is highly effective in conjunction with Pamela Kupper's lighting design. More interesting blocking is used when actors climb to the top of tall ladders to signify the passage of time and the changing of season—red maple leaves fall from these actor's hand to mark the arrival of autumn. The story is told imaginatively through Barre's direction. Scenic design is by Ashley Cusack, and the colorful, multipurpose costumes are designed by Peter Fogel.