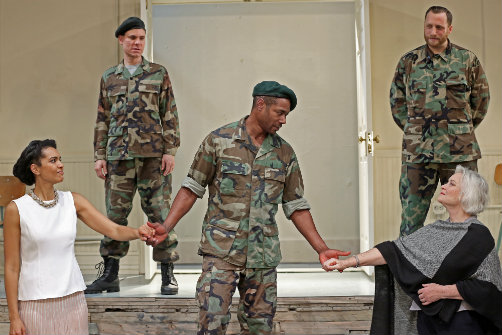 BOTTOM LINE: Shakespeare's late-career drama of political strife in ancient Rome is brought lustily to life in a production that looks more like 2016 A.D. than 500 B.C.

One of Shakespeare’s latest and most cynical tragedies, Coriolanus is a no-brainer for an election year. Its hero is a proud and stubborn soldier who proves incapable of “pivoting” to a leadership role in civilian life. Red Bull Theater mounts the play with a stellar cast and the verve and gusto audiences have come to expect from them.

In ancient Rome, nobleman Caius Martius (Dion Johnstone, making his New York stage debut) is a fierce and courageous warrior whose deeds in the field have kept the city safe from the hostile Volscians, led by Aufidius (Matthew Amendt). For his success in the battle of Corioles, Martius is given the title “Coriolanus.” His ambitious mother Volumnia (Lisa Harrow) and mentor Menenius (Broadway regular Patrick Page) want to see him rewarded with the position of consul. However, scheming politicians Brutus (Merritt Janson) and Sicinius (Tony-winner Stephen Spinella), seeing Martius as a threat to their own power, fan the flames of resentment among the populace, and Martius’ own distaste for campaigning makes it all too easy. Soon the war hero is facing charges of treason in the very city he saved from ruin.

Director Michael Sexton has set the action in an approximation of the present day, which allows him to draw several parallels to recent political events: the people of Rome look suspiciously like Occupy Wall Street activists, and Martius’ election to the consulate ends with a shower of red balloons cascading down on him and his smiling, waving family. Indeed, the play is deeply concerned with the workings of democracy, but draws conclusions it might be hard for 21st-century Americans to swallow. Martius is a difficult character to root for: despite his valor and skill, he’s a snob, thoroughly unconvinced that the common people possess the intelligence or character to make political decisions. The irony, of course, is that he’s right. Would you rather have useless leaders who flatter you, Shakespeare asks, or effective ones who don’t?

In its first half, Sexton’s production is an exciting mix of bloody combat, political drama, and wry comedy. In its second half, the uniformly excellent cast (most of whom play multiple roles) delivers a series of heartbreaking scenes, as Martius is forced to choose between his family and friends and his tarnished honor. Patrick Page reminds us how indispensable he is to New York’s theatre community, and Lisa Harrow makes us wonder why we haven’t seen more of her on local stages. In the title role, Dion Johnstone is appealing even when he’s being a hotheaded jerk.

The modern trappings of Red Bull Theater’s Coriolanus provide the audience some extra food for thought, but even in togas, its cast would be well worth seeing. Their exceptional work, driven by director Sexton’s brisk pacing and intelligent staging, is like red meat for hungry Shakespeare lovers. Coriolanus won’t make you forget about the current political climate, but it might make you feel the slightest bit grateful to live in a country where elections don’t end in bloodshed.

(Coriolanus plays at the Barrow Street Theatre, 27 Barrow Street, through November 20, 2016. The running time is two hours and 40 minutes with an intermission. Performances are Tuesdays and Wednesdays at 7:30; Thursdays and Fridays at 8; Saturdays at 2 and 8; and Sundays at 3. Tickets are $80-$100 and are available at redbulltheater.com or by calling 866-811-4111.)