This show is closed

Performed by Chita Rivera; Musical Direction by Michael Croiter
Presented by On Stage at Kingsborough 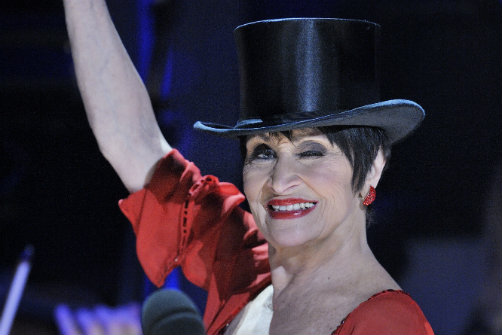 BOTTOM LINE: For one night only, Broadway royalty was on stage in Brooklyn.

On the heels of earning her tenth Tony nomination last year for The Visit, Chita Rivera, at 83, is still enjoying firsts: earlier this month she made her debut as a headliner at Carnegie Hall during this run of shows. Having never seen her on stage before, Brooklyn was my first opportunity to witness this living legend, and it was worth the trek. Seeing Rivera shimmy in her black ensemble and red shoes while singing “All That Jazz” from Chicago (in which she originated the role of accused murderer Velma Kelly under stage titan choreographer Bob Fosse), I got chills.

Rivera has had a career of more than a half century—one of her earliest roles was Anita in West Side Story. During one of the interludes in which she lovingly takes the audience through highlights from her extraordinary career, she speaks of all of the incredible composers she has met, including West Side Story’s creator Leonard Bernstein. She reports she was nervous and awestruck, praying “I wouldn’t throw up that afternoon.”

On another occasion, she relates how composer Cy Coleman called her and on the other end of the line were Fosse and his then-wife actress Gwen Verdon, the team who had created Sweet Charity. They asked if Rivera wanted to go on the road. “In my world, that’s a very good phone call.” But one angel on her shoulder questioned whether she should step into Verdon’s shoes. The angel on the other shoulder answered, “just bring your own shoes.”

She worked with composer and lyricist John Kander and Fred Ebb on several shows, and said if not for them, “I would not be standing here.” For her role in The Rink with Liza Minnelli, Rivera won her first Tony Award. It wasn’t a show I knew, but I really enjoyed the fun, up-tempo number “Chief Cook and Bottle Washer” that she selected. Proving what a small world the theatre can be, future Chicago film director Rob Marshall was in the chorus of The Rink thirty years ago. A decade later, they crafted Kiss of the Spider Woman, which survived being killed by critics during an out of town run, and went on to win six Tony Awards, including a second one for her.

It’s a gift to still have Rivera—who has outlived Fosse, Bernstein, and Fred Ebb—around to dance, sing, and tell stories about Broadway’s golden era of theatre. Unfortunately she only did a handful of shows around the tri-state area this month, but look for more dates next year.