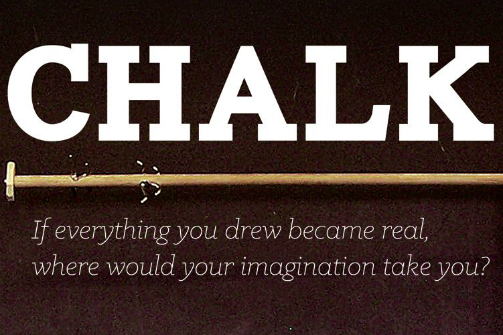 BOTTOM LINE: A new take on the most universal subject of love and heartbreak, borrowed from the very vintage world of clowning.

With CHALK, Alex Curtis uses mime and clown in an entirely silent (at least in dialogue) comedy about the stakes of a new relationship. Armed with a stick of chalk, he’s able to draw exactly what he wants in order to prepare for a date, beginning with a simply drawn box of a house, complete with overhead light and light switch of course. And he knows she’ll like flowers and a cute puppy, so this place shall have that too. It’s not all together different than the routine of constructing our public identity, choosing the right photos for Tinder, picking out our date outfit, and composing that “I had a nice time” text the next day.

Curtis delivers a wonderful clown show to be enjoyed on this adult level or I imagine also by a younger crowd who will delight in the many ways it takes Curtis to hang a coat on a coat rack.

Where CHALK is most successful is when Curtis uses the medium of clown to investigate depression and loneliness. The chalk box he builds himself becomes a trap. And only his own left arm inside his own coat jacket pocket can console him. It’s easy to find the truth in this as we see him isolated amongst a sea of people glancing back and chuckling. This is the kind of thing for which people take antidepressants—enacted live on stage!

We learn that these chalk lines that have become a symbol of both the possible and also constriction can easily be erased.

CHALK (a silent comedy.) is created and performed by Alex Curtis. It is produced by Christina Henricks. Production support is by Dennis Setteducati and coat rack design is by Alex Haynes.