By Sam Shepard; Directed by Scott Elliott
Produced by The New Group 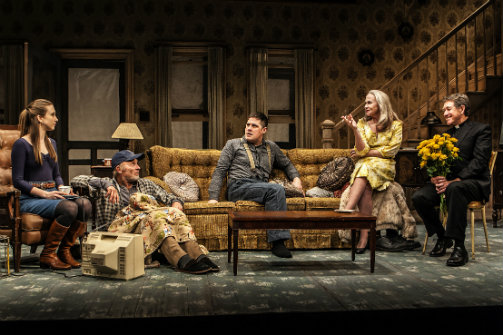 BOTTOM LINE: An abrasive and fascinating look at an American family, Sam Shepard’s career-changing and Pulitzer Prize-winning American drama returns to the New York stage 20 years after its last major production in a much anticipated, star-studded revival that does not disappoint.

A rough-around-the-edges Ed Harris sits watching television in arough-around-the-edges Illinois farmhouse (wonderfully designed by Derek McLane). In a contest of which is more worn down, Harris would win by a mile. He is barely recognizable as Dodge, a painfully tired old man who struggles to even breathe, let alone take charge of his household and farm in 1978. Dodge's wife, Halie, played by Harris’ actual wife, Amy Madigan, starts the play unseen, conversing with her husband from upstairs as he sneaks swigs from a bottle. They are barely hanging on to what’s left of their marriage as well as their untended farmland while looking after their two grown sons, Tilden (Paul Sparks) and Bradley (Rich Sommer). Tilden, a troubled, middle aged man, has returned home after getting into trouble in New Mexico. Bradley, missing his left leg, takes out his aggression by shaving his father’s head as he sleeps.

It is the American dream gone wrong, hopes and promises left unfulfilled. Shepard has created a family so far unwound, that rules of human interaction no longer exist. Instead of watching people respond to each other in the ways we as the audience have been conditioned to expect, these colorful characters break all expectations of human behavior. Though at first their responses were jarring, the shock I felt soon turned to wide-eyed fascination. In this family, anything can happen, and that is a thrilling thing to watch onstage. Revisiting this work is a reminder to Shepard’s brilliance as a playwright.

In the second act, Vince (Nat Wolff) and his girlfriend Shelly (Taissa Farmiga) come for a surprise visit to see his grandparents for the first time in six years. They are on their way to visit his father, Tilden, who Vince believes still lives in New Mexico. Halie isn’t home. She left with the pastor and has been gone for a day or so. What Vince thought would be a warm welcome turns to confusion as neither Dodge nor Tilden are able to recognize him. As conversations and convincing go nowhere, hints of a family secret buried in the backyard slip out.

Though he barely moves from his spot on the couch, Harris is truly magnificent. His natural subtlety and dry wit make for a powerful, yet easy to watch performance. Madigan is off-the-wall and perfect as the wife, mother, and lover who tries her damnedest to hold it together. Sommer and Sparks as the wayward sons are devastatingly effective. Wolff is full of manic energy, yet lacks no clarity in his scenes. Farmiga brings a spunky resilience to every interaction she has. Both these younger actors work hard to hold their own in a company of veterans. And let us not forget Larry Pine, who is spot on as Father Dewis.

Everything comes to a head in the third act as secrets, mistakes, lies, and perhaps too much truth come flying through the small farm house, along with crashing china and beer bottles.

Director Scott Elliott skillfully brings together this thought-provoking piece (with the help of a top notch design team that intricately created the simple setting). Elliott highlights the unsettlingly relatable aspect of this family that Shepard has built. The audience goes from shock to laughter, and often both at the same time. It’s impossible not to leave the intimate theatre at The Pershing Square Signature Center and wonder what exactly just happened. This production of Buried Child is theatre worth thinking about for days.

(Buried Child plays at The Pershing Square Signature Center, 480 West 42nd Street, through April 3, 2016. The running time is one hour forty five minutes with no intermission. Performances are Tuesdays, Wednesdays, Thursdays, and Fridays at 7:30; Saturdays at 2 and 8; and Sundays at 2. Added performances Sunday, February 21 at 7:30; Wednesday, February 24 at 2; Wednesday, March 2 at 2; Wednesday, March 9 at 2. Tickets are $27-$107 and are available at ticketcentral.com. For more information visit thenewgroup.org.)

Buried Child is written by Sam Shepard and directed by Scott Elliott. Set Design is by Derek McLane. Lighting Design is by Peter Kaczorowski. Sound Design is by Jeremy S. Bloom. Costume Design is by Susan Hilferty. Stage Manager is Valerie A. Peterson.