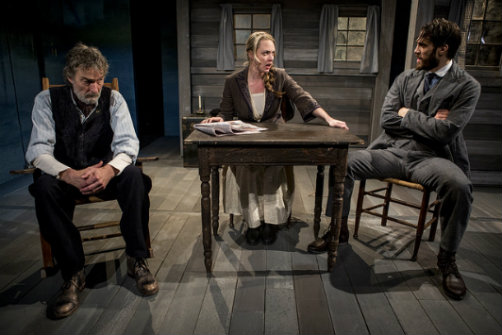 With feminism on the foreground of the 21st-century social-political landscape, director Peter Richards must have seen the urgency and relevance of Anna Christie. O'Neill's play shows a woman’s struggle between the expectations of men and her desire to be the captain of her own life. The life of young Anna Christie (Therese Plaehn) is in disarray as a result of choices made by men, like her father Chris Christopherson (Stephen D’Ambrose), who sent her away to be raised in the United States for a better life, which only turned out to be a pipe dream. As the plot unfolds, Anna gets reunited with her father, a sea captain from Ireland, and falls in love with shipwrecked sailor Mat Burke (Ben Chase). Both men perceive Anna as their respective ideals. For her father she’s a good girl, in the most conservative and traditional sense—a good girl who grew up on a farm. For her lover she’s humble and chaste wife material, different from the weekend-long flings sailors have whenever they anchor briefly ashore. Anna, mustering the courage to define her own identity, becomes stuck amidst the bliss of love and the shame of her secret: when she finally reveals to Mat her past as a prostitute, the strength of their love is tested.

Therese Plaehn brings out the strength and vulnerability of O’Neill’s multifaceted heroine. Her internal struggles are subtle, yet they run deep like a roaring current beneath the placid surface of the ocean. Plaehn and Chase’s easy chemistry makes the love at first sight believable. Chase’s presence is electrifying as Mat Burke, the idealistic, naïve, yet misogynistic sailor who makes you fall in love with him like a victim of Stockholm syndrome. Stage and screen veteran Stephen D’Ambrose brings a sympathetic version of Christopherson, the archetypical old sailor who entrusts and blames everything on the sea. The presence of the two men in Anna’s life, and the struggle between them, is telling evidence of the eternal theme in O’Neill’s play: the conflicts between the "old" and the "new." Anna’s choice is to be the heroine of her life, instead of being someone else’s attachment. What she shows to the men, and more so to society, is that she is not a picture-perfect visage of male perception, but a three-dimensional character, one who is flawed but nevertheless true.

Of course Anna Christie is a mirror of its historical context, reflecting a time when women’s social roles might make a modern, feminist audience gag. Anna’s character is O’Neill’s foresight of a strong female figure who makes courageous attempts to navigate through a patriarchal world. According to director Peter Richards, Anna is a quintessentially American character, one who "believes in redemption, in second chances, in reinvention, and in opportunity," and that the play's wrestling of the old and the new speaks to our contemporary times. And indeed, Anna Christie features disturbingly accurate metaphors of what women still experience—getting slut-shamed for their life choices and gas-lighted by their male cohorts. Working Barn's production makes an excellent case for this piece's continued relevance.

(Anna Christie played at The Wild Project, 195 East 3rd Street, through December 17, 2016. The running time was two hours 15 minutes with one intermission. Tickets were $15. For more information visit workingbarnproductions.com.)