Where Have All The Glaciers Gone? 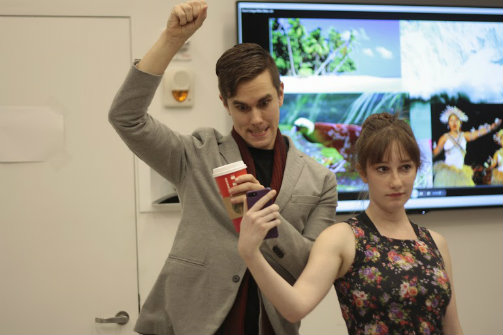 Colin Waitt and Phoebe Rose Sanford in Where Have All The Glaciers Gone?. Photo by June Xie.

BOTTOM LINE: An intimate, darkly comic meditation on the personal and global effects of climate change.

Like many socially conscious, moderately privileged individuals, you might call yourself a fairly “green” person: you recycle, take public transportation, buy energy-efficient lightbulbs. Now, consider this: do you own a smart phone? Travel in airplanes? Grab the occasional—or frequent—take-out latte? Your carbon footprint might be much bigger than you realize. Developed as part of Climate Change Theatre Action, a series of performative responses to the United Nations 2015 Paris Climate Conference, Where Have All The Glaciers Gone? calls upon us to address the immediate, and personal, impact of this far-reaching issue.

Co-created by director Erin Mee and its ensemble, Glaciers approaches the subject of climate change through a variety of musical, choreographic, and theatrical vignettes. These sequences range from darkly funny (a Top-Ten list of the best things about global warming, complete with rim-shot sound effects) to tenderly expressive (partner-dances with an inflatable globe) to harrowingly factual (accounts of Pacific-Islander refugees forced from their homes by rising seawaters). One standout piece, Colin Waitt’s “The Day Wasted,” humorously epitomizes the individual’s contribution to our worsening conditions. Following an average urban dweller (Waitt) throughout his daily wanderings, we see the staggering amount of trash left in one person’s wake: Waitt haphazardly tosses aside Starbucks napkins, restaurant receipts, and superfluous mail-order packaging until the stage is literally covered in garbage. Other scenes go on to mock our collective apathy: “Because,” the cast’s litany of justifications for less-than-green practices, is as relatable as it is absurd. Similarly, in “A Question From The Audience,” a conference attendee (a hilariously self-righteous Caitlin Goldie) presses a climate scientist (Waitt) for easy conservation practices—then proceeds to shoot down his every possible suggestion.

Glaciers’ simplest moments bring its greatest emotional resonance. The ensemble’s recitation of “Things We Will Miss” when climate devastation takes hold reminds us that the modest pleasures of local honeycrisp apples and favorite hiking trails are as much at stake as the submersion of the Maldives islands and the wipeout of entire species. Lynn Rosen’s “Lullaby” scenes, in which a pregnant mother (Goldie) sings a nature-tinged song to her unborn child, then repeats the verse with various plant and animal references omitted, offer a subtly-chilling meditation on the world we will leave our descendants.

The show concludes with a number of participatory elements. In “Walk The Walk,” audience members are invited to stand in a line, taking a step forward for every environmentally-sound practice we’ve completed, and stepping backward for each detrimental activity. It’s an eye-opening, if cringeworthy, exercise, but it’s handled with a light enough touch to make us laugh as much as think. This conservation cha-cha is followed by a “Climate Change Macarena,” in which Phoebe Rose Sandford leads us in a sustainability-themed version of the infamous dance, miming such actions as biking to work and air-drying laundry.

Our role in the current environmental crisis—and subsequent responsibility to address it—is a loaded topic, especially in the context of live, interactive theatre. However, Glaciers’ wry empathy and self-aware humor offsets its potential for preachiness or sentimentality. It is, as Waitt confesses during a final waltz with a brave audience member, all too easy to despair over these monumental problems. However, our genetically-superior human hands hold the power to craft solutions—or at least grip tightly to the things we love.

(Where Have All The Glaciers Gone? plays at 244 Greene Street, ground floor (NYU) through December 13, 2015. Remaining performance is Sunday at 7. Tickets are $20 general admission and free for NYU students with reservation/valid ID, and can be purchased at https://www.artful.ly/events/7630.)

Where Have All The Glaciers Gone? is conceived and directed by Erin B. Mee and and created by the company. Assistant director is Sophia Lana Cohen Smith. Texts by Kendra Fanconi, Caitlin Goldie, Erin B. Mee, Lynn Rosen, August Schulenberg, and Colin Waitt. Movement Director is Jonathan Matthews. Choreography by Jonathan Matthews, Phoebe Rose Sandford, and the company. Soundscape by Natalie Jonsonius Neubert. Stage Managed by Sophia Lana Cohen Smith.