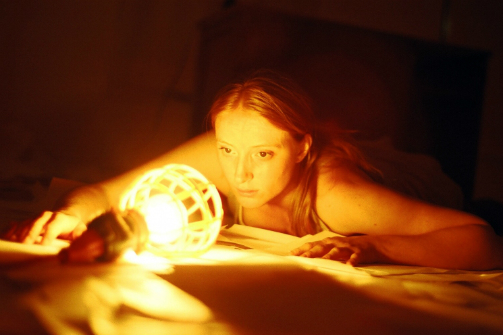 BOTTOM LINE: An intense and introspective look at one young woman’s quest to make the U.S. a more humane and egalitarian nation.

As the never-named protagonist (played by Kersti Bryan) of Asa Merritt’s compelling political drama True Believer watches the Arab Spring unfold in 2010, she becomes so taken with the idea of grassroots social change that she quits her job as a nanny, says goodbye to her family and friends, and heads to Egypt. Her goal is to offer an eye-witness account of what she sees, something she believes will galvanize support for the rebels and launch a worldwide movement for peace and equality. She quickly ingratiates herself with a group of Cairo-based activists and participates in numerous forms of underground resistance.

It’s a heady time, and The Woman – while many people are referenced in the play, she is the only character seen by the audience in this thought-provoking one-woman show – is absolutely sure that her reporting will move the masses to revolution. “In Cairo I wrote the best essay of my life,” she confides. By this point she is back in the United States, and is telling her story while moving between her desk and the floor of a room that is covered with countless pieces of discarded paper. Surrounded by reams of notes, she explains that she expected her account of “people willing to die for a cause” to kick-start a grassroots campaign to change business as usual, only to find that most people, including her closest friends, were disinterested in hearing her insights and observations.

She’s so disheartened that she returns to Egypt and heads to the Valley of the Kings, hoping “to find the right words,” sure that this time her articles will be more effective. She interviews scores of people and writes copious accounts. Then, upon returning home, she spends months composing a manuscript which she eventually sends it to every publisher she can think of.

But the rejections mount: “You’re romanticizing violence,” one tells her; “the book is not applicable to the average reader,” says another.

“All I do is make paper airplanes out of the rejection letters,” The Woman explains. Then, one day, a new missive arrives -- sans sender name or return address -- asking her to meet someone named Sam Bray at a fancy café at 3:00 p.m. on the following Thursday. It seems weird, but she goes. Sam, it turns out, is an absolutely stunning female who informs The Woman that her group, a radical cell called Insomnia, needs a writer to help them explain their ideology and vision. Somehow, they’ve stumbled upon The Woman (we never learn how this connection was made) and during the course of the meeting she accepts the role of publicist/scribe.

Suffice it to say that the denouement of the story is explosive and disturbing, but the play not only addresses violence as a tool of change, it also highlights the dangers posed by personality-driven cults and all-or-nothing revolutionary fervor. There’s an electrical charge in the air as Bryan’s provocative monologue unfolds and her expressive face reveals a bevy of emotions and emotional responses. Supplemented by the guitar work and vocals of her talented musician brother, Bay -- who performs offstage throughout the hour-long production and whose presence periodically breaks the considerable tension in the theater -- and an amazing use of lights and candles to reveal and hide The Woman's reactions, the play is something of a political sucker punch.

Needless to say, there is an overt need for increased democracy in the U.S. At the same time, True Believer asks viewers to question whether ends ever justify means or if the road to victory is as important as the destination.