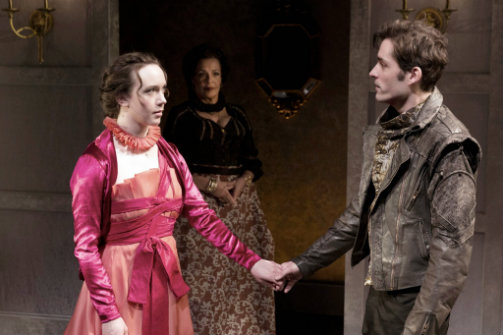 BOTTOM LINE: A nearly 400-year-old drama of sexual deviance, jealousy and revenge gets a wickedly good production with an impressive cast.

An impossible love…a clandestine liaison…a husband wronged…a woman scorned…disguises and mistaken identity…swords, knives, and poison. These are the building blocks of John Ford’s 1633 tragedy, ‘Tis Pity She’s a Whore, a play so extreme that it begins with a confession of incestuous longing and gets worse from there. By worse, I actually mean better, as Red Bull Theater’s current production of this lurid verse classic is thoroughly entertaining.

‘Tis Pity She’s a Whore belongs to the era in English drama just following the retirement of Shakespeare, characterized by plot lines overflowing with revenge murders and unbridled sexuality. Its hero is Giovanni, who, like Hamlet, is of a studious nature, and who, like Romeo, is mentored by a well-meaning friar. Also like Romeo, Giovanni is in love with someone he shouldn’t be -- namely, his own sister, Annabella. The friar is appalled and counsels him to put this desire out of his mind. As you might surmise, he does no such thing.

What makes ‘Tis Pity a great play instead of just a shocking one is the fact that the taboo passion between brother and sister -- yes, she shares his feelings -- is somehow presented as innocent and earnest, if misguided, while the world around them is full of fools and hypocrites. It’s no wonder that Giovanni is so enthralled by Annabella; everyone else in Parma, where the action is set, seems to feel the same way. Her suitors include a hotheaded soldier, a childish dandy, and a smarmy nobleman who thinks nothing of seducing a married woman and then coldly dismissing her in the aftermath. Between the competition for Annabella’s hand and the plots for vengeance by those wronged in love, the potential for bloodshed and chaos is ever present. By the end of the play, multiple bodies (and body parts) have littered the stage.

Jesse Berger, artistic director of Red Bull Theater and the director of this production, handles the material masterfully. The cast is top-notch, led by Matthew Amendt and Amelia Pedlow, magically making sense of Giovanni and Annabella’s outrageous relationship. Also superb is Derek Smith as Vasques, a scheming servant whose “loyalty” to his narcissistic boss puts the siblings and their secret affair in jeopardy. The design team also gets high marks, particularly Sara Jean Tosetti, whose half-period, half-punk costumes underscore the raunch of the play’s central conflicts.

Red Bull has been presenting 17th-century tragedies and other psychologically complex dramas since 2003, and the years of consistent, solid work are paying off. ‘Tis Pity She’s a Whore is a skilled, absorbing production that will satisfy those already familiar with John Ford’s work and intrigue those who have not yet had the good fortune to encounter it. The show is long, but it doesn’t feel that way; you won’t believe how enjoyable two-plus hours of forbidden lust, betrayal and carnage can be.