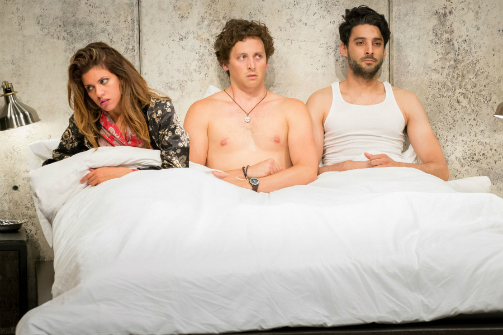 If you’re like me, these are cheap thrills. There’s a tired, cliché quality to the conversation. And the actors give it their all to reel me in.

I’m happy to report that this is merely the set up to a much more intriguing and substantive second act. Leila is publishing a novel and Doug has been hired as her photographer. (Ok, that feels a little convenient.) But when she arrives for the shoot, the set is decked out in souvenir-style, Egyptian décor, complete with a mound of red and gold throw pillows, a hookah, an exotic looking lamp, and an ominous burqa hanging upstage (designed wonderfully offensively by David McCrum, Seth Chandler, and Erinn McGrew with costumes by Alison Heryer). Alia is overcome by feelings of cultural objectification that lead this play in a startling and exciting direction.

There’s a hefty amount of bravery behind El Guindi’s play. The topical territory of gender, sexism, and identity within Islam makes for an important play worth taking note. Director Chris Coleman finds the delicate balance in the expectations of the play’s sex comedy beginnings and its intentional subversion by the second. And with Attalah and Franzen’s bodies both on full display, you can’t help but honor their literal and metaphorical plunging of deep emotional territory.