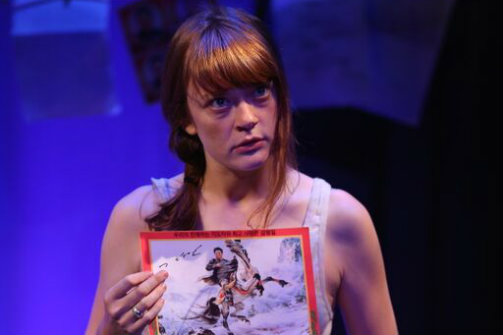 Colby Minifie in Love Letters to a Dictator. Photo by Carol Rosegg.

BOTTOM LINE: Three plays about people living life: some lives we care about more than others.

The three short plays in Summer Shorts Series B, show us three people trying—or not trying—to muddle through life. As they grapple, we dwell in the loneliness manifested through disconnecting with family, living through horrible mistakes, and lacking courage. These are stories of being an outsider, of being unfulfilled and lost.

Unstuck, by Lucy Thurber, features the goofy, yet sincere Jackie (a puppy-dog-sweet Lauren Blumenfeld) attempting—so very earnestly—to gain constructive feedback from her brother on her comically bad tap solo. But, closed off Pete (Alfredo Narciso) is unsupportive. After all, it is his birthday and he’s going through something (we aren’t quite sure what) but, somehow we’ve all been through it before.

So what if she’s terrible at tap dancing? She will dance through the ridicule! Pete doesn’t even try, weak and scared of the world, unable to take a chance or even a step out the front door. Sara (Carmen Zilles), his friend, arrives to celebrate his birthday, but also needs Pete's advice. He seems to do a lot of listening, but no one really listens to him. Through a series of awakenings, he realizes the inevitable will happen (getting married, having kids, dying old together, etc.), and that it is too much to handle. Until, that is, his lover guides him to peace. And just like that, he’s going to be great.

The second play, Built, by Robert O’Hara, begins with the awkward first moment of a woman hiring a male prostitute. We discover it’s been ten years since she’s had sex. And it was with this same man, only when he was fifteen and her student. The direction (also by O'Hara) is raw and menacing, tense and creepy, leaving me unsure of what would happen next. The dissonance between the monotone, statement-like dialogue of he gigolo/ex-child lover Mason (played by NYU newbie Justin Bernegger) and the electric, volatile, jagged Mrs. Back (Merritt Janson), create a story of a woman who is carrying an enormous weight.

The final play, Love Letters to a Dictator, written by Stella Fawn Ragsdale, is clever and funny, sweet and honest. Stella (played by an incredible Colby Minifie) is a recent transplant from east Tennessee to New York City, who decides the city was too lonely a place, and moves to work a farm upstate. She is earthy, poetic, compassionate, and damn near the most honest person you’ve ever heard. We meet her as she decides to start writing to the Supreme Leader of Korea: Kim Jong-il.

This could’ve turned into a joke, but with such a fine actor, it really hits home. With direction by Logan Vaughn, Love Letters is thoughtful, yet active; the transitions reveal a portrait of a woman struggling, but resilient. Stella’s poetic way of speaking and her deep sincerity are like a sip of ice-cold lemonade on July 4th. As she corresponds with the leader, we learn more about her. The songs and music (sound design by Nick Moore) are especially vivid, linking all of us to her home—the moment we hear Dolly Parton sing “I Remember” we all feel the pain and struggle this woman is going through. Throughout, she asks, “Do you think I’m good?” She didn’t ask me, but I would’ve answered, “Yes, Stella. You are more than good.” I just hope her momma wouldn’t think anything different.