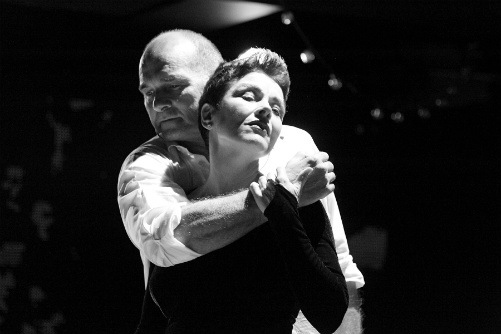 Christine Andreas and Pascal Rioult in Street Singer. Photo by Paul B Goode.

BOTTOM LINE: A sweetly literal passage through the buoyant life of French songbird, Edith Piaf, this cabaret show does a new thing in the field of dance.

Street Singer, a collaborative offering from RIOULT Dance NY, a neo-modern dance company, takes place in a nightclub -- the ambiance ever primed for a passage to postwar France. And in this converted nightclub we are graced with the ghost of Edith Piaf, the famous French songstress who died penniless and in obscurity. RIOULT founder/choreographer Pascal Rioult rather focuses the cabaret on the singer's strength and national presence. Piaf, played by the sublime Christine Andreas, wafts up and down a catwalk comfortably retelling her life’s critical moments: her childhood blindness, her move to Pigalle, and the death of her true love, a boxing champ. Andreas sings with unmatched clarity and magnificently authentic French. She is an anchor true and true. Accompanied by none other than Rioult and his company, the stories are told close to reality with little interpretation. Rioult himself plays each of Andreas'/Piaf’s male counterparts onstage, dipping in and out of corners, edifying us with her credentials. The French born choreographer’s presence onstage mirrors an obsessive -- a man drawn dizzily to Piaf’s song. The interest runs so deep that two passionate kisses between Andreas and Rioult hang in the second act. This is not just an homage.

It’s a cabaret! RIOULT Dance NY, with roots in the Graham style of modern, boast a very strong company who range in diversity, but not technique. Though the choreography incorporated wonderful moments of contrast and contact, it was often times too literal. When we’re told the story of the harrowing time Piaf was blind there is a trio to match the event too cleanly and pointedly. I was very drawn to a duet with members Jere Hunt and Sara Seger which introduced the nuances of a torn relationship in WWII. The section began to read like the others, but the aggressive contact work between the two dancers was fresh and left much to the imagination as it contrasted Piaf's sullen song. This piece in particular was a step toward expanding our idea of “war” rather than merely presenting a pretty jete in uniform.

This gnawing conflict between the literal and the interpretative could not take my focus away from the piece’s other luscious offerings like its lights or projections by Brian Clifford Beasley. Beasley adorns a huge upstage panel with gorgeous images of French streets, a televised boxing match, and what looks like a superimposed Renoir. The projections smartly settle the action onstage. And what about the stage: a skinny platform wherein ten beautiful dancers and Andreas navigate with ease. This design feat alone demonstrates the daring impulse of RIOULT Dance NY's cabaret. I think the piece's strength really lies, though, in Rioult's own emotional tether to the singer. The moments the cabaret lifted that Freudian hood I was entirely fascinated, curious and engaged. Otherwise, the show is sweet and expertly honors a wonderful talent, but makes me wonder, "what else?" I am grateful for the stunning Piaf lesson, but I wanted to see her impact in a tangible way.

In this celebration of Edith Piaf there is no death, for the show ends with Piaf’s admission she wouldn’t live without her hard times. And as Andreas sings “Non Je ne Regret Rien” shortened, restaged versions of the evening’s numbers filter satisfactorily onstage. As the song comes to a close Piaf is enshrined by the mixed memories, but remains entirely triumphant. The show is a choreographer’s starry love letter to one of his countrymen and, quite possibly, one of his fantasies. Still the adoration is so sweetly thick you can’t help but love Piaf as much as Pascal does.