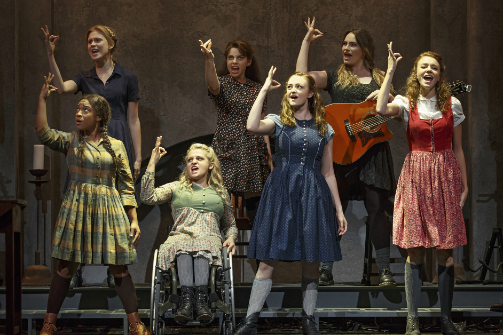 A scene from Spring Awakening. Photo by Joan Marcus.

The 2006 Tony Award-winning musical Spring Awakening was not due for another Broadway turn so soon; the original production closed just 6 years ago. But this new version, produced by Deaf West, makes the case for the power of a revival. When a beloved show can be re-mounted and re-imagined to not only bring out the beauty of the original but to say something totally new, it doesn't matter how much time has passed (or not passed, as it might be). This important production is a welcome addition to the new Broadway season, and well worth the time of both avid fans and those uninitiated with the show.
Spring Awakening is based on the play Spring's Awakening by Frank Wedekind, written in Germany in the late 19th century. Banned for its crude and intimate look at teenagers discovering their sexual selves, the story is amazingly familiar even today, particularly for the way it pits teens against adults, showing the disconnect between the generations, while so astutely exposing the internal conflict that comes with coming of age.

Wendla (Sandra Mae Frank) is a schoolgirl in a strict family, and she begins to realize that she's uninformed when it comes to the subject of baby-making. Her mom (Camryn Manheim) is horrified to have the conversation, so she quickly drops it. Wendla's classmates, meanwhile, are having similar concerns. Melchior (Austin P. McKenzie) draws it out for his good friend Moritz (Daniel N. Durant), and both get in trouble when the physical evidence is discovered. As these "awakenings" transpire, things begin to go south. Wholly unsupported by teachers and most other grown-ups, the kids are on their own to navigate these awkward times. The pressures take their toll and—lest we forget this play is German—the kids will suffer the consequences.

With music by Duncan Sheik, Spring Awakening is a soulful rock musical with pop undertones. In this production the band sits on stage, becoming part of the visual picture, set into Dane Laffrey's cavernous design. It doesn't rock as hard as the original Broadway production did, and the only true concert moment happens during "Totally Fucked." But the real star of this production is the use of American Sign Language (ASL) to tell the story. Many of the cast members are hearing impaired, and all of the dialogue and lyrics are signed or projected. The physicality of ASL is, in its own right, a beautiful form of movement, and the aesthetic of gesture takes center stage in this revival.

Katie Boeck is the voice of Wendla, and Alex Boniello is the voice of Moritz. There are a few other cast members who play the voices of various roles (that are played by non-hearing actors), and the conceit includes these performers sharing the stage with their counterparts. The result is beautifully "meta" as we're always aware of the double duty. We know we are watching a piece of theatre, and the comment on language fuels a deeper level of understanding in this musical, which just so happens to be about lapses in communication. The large cast is energetic and passionate. Spring Awakening is an ensemble endeavor, and a beautifully rendered one at that.

Michael Arden's direction keeps the show continuously engaging. Although the production is directed to a pristine finish, there is a lot going on, and some of the choices seem superfluous (I'm thinking specifically of bubbles and a ribbon dancer that seem cheap and distracting in light of the otherwise powerful visuals). Spencer Liff's choreography is the hidden gem of the production, so seamlessly integrated with the signing that I didn't realize how all-inclusive the movement vocabulary is until long after I had left the theatre.

The Deaf West production of Spring Awakening is miraculous in its representation of the power of theatre. On its own, the revival has many wonderful attributes, including a dynamic cast and impressive design. But far more important than any of that is how the company puts all types of performers on stage and speaks to ability and disability in such an important way.

(Spring Awakening plays at the Brooks Atkinson Theatre, 256 West 47th Street, through January 24, 2016. Performances are usually Monday at 8, Tuesday at 7, Thursday at 7, Friday at 8, Saturday at 2 and 8, and Sunday at 3 and 7:30. Check the calendar at springawakeningthemusical.com for showtimes. Tickets are $49-$139 and are available at ticketmaster.com.)