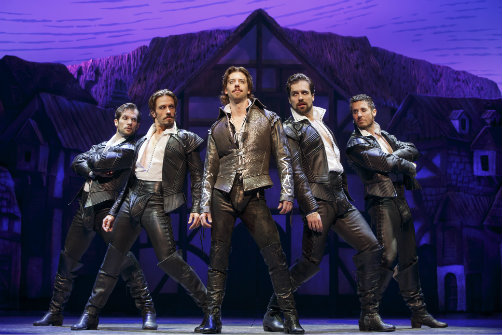 The premise of Something Rotten! is terrific. It's about the (fictional) first musical ever written. Nick (Brian d'Arcy James) and Nigel Bottom (John Cariani) are brothers trying to write a hit play in Elizabethan England. (It's worth noting Something Rotten! was conceived and largely written by two brothers – Wayne and Karey Kirkpatrick). Unfortunately for the Bottom brothers, no playwright can compete with the popularity of William Shakespeare (Christian Borle) – having Borle play Shakespeare as a rock god is another brilliant move. Nick goes to Nostradamus (not the famous one – his nephew, played by Brad Oscar) to find out what the next big thing in theater will be...and learns it will be musical theatre.

Nostradamus then goes into one of the highlights of the show, the crowd-pleasing song-and-dance number "A Musical" in which he explains the rules of the genre. "A Musical" makes fun of the art form while paying homage to tons of musicals, and is accompanied by lots of tap dancing (director Casey Nicholaw also choreographed). The trouble with Something Rotten! is that from there, the humor never really advances past references to other musicals and Shakespeare plays. And these references are often just the title of a show or a famous quote. While the audience (myself included) laughs in recognition, it's just too easy.

Also, after such a strong beginning, act two feels muddled and overstuffed. That said, Something Rotten! is entertaining from start to finish. A lot of this is in the performances. As Nick Bottom, James is just cranky enough while still being charming. His song "God, I Hate Shakespeare" is another high point. Cariani is so adorably bumbling that it’s impossible not to root for him. And Borle is ever the scene stealer. Special thanks to costume designer Gregg Barnes for those codpieces (see photo). Also, props to the writers for giving Nick a wife who is more than just a token female character: Bea (Heidi Blickenstaff) thinks women should be allowed to work for the same pay as men.

There is a lot that the writing team gets right. Although it's not a perfect rhyme, I appreciate any lyric that rhymes "penis" with "genius." And the music is pretty catchy; I still have the opening number, "Welcome to the Renaissaince," stuck in my head.

I don't want to be too hard on Something Rotten!, especially because it's completely original – not based on preexisting material. But I can't help but think that the Seattle out-of-town tryout, scrapped for a direct-to-Broadway production, would have helped. Rotten this show is anything but. However, with a little more work, it might have been something great.