Paradox of the Urban Cliché 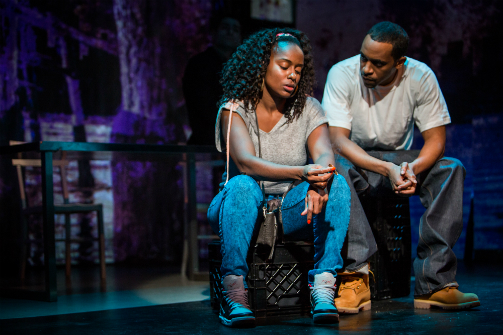 Eboni Flowers and Jaime Lincoln Smith in Paradox of the Urban Cliché. Photo by Bjon Bolinder.

BOTTOM LINE: A hustler desperately dreams of getting off the block and out from under the fears that threaten to trap him in the hood of his mind forever.

The fiery fall verdicts on many black men’s deaths are still aflame in our country; fear of corrupted “authority” and inconsistent “justice” keep these embers alive. Though Paradox of the Urban Cliché is not about Michael Brown or Eric Garner it posits the very real concern that these wars begin in the mind. Playwright Craig 'muMs' Grant provocatively places all of the play’s reality into a surreal box. Like in those mind-bender films, Eternal Sunshine of the Spotless Mind for example, Paradox sneakily scurries from the preconscious to the subconscious to explore the depths of character motivation.

Here the character is Ceasar (Jaime Lincoln Smith), or Ceez, an undiscovered math genius who runs the hill in Harlem with his craps game and his woman Smiles. He makes the mistake of falling asleep to the TV one night and ends up in a holding cell with Authority (Morgan James Nichols). Authority personified is a white man; there’s great contrast to Authority’s tapered suit and Ceez’s sagging pants. It’s very unclear if Ceez is charged with anything, yet he remains, not in Authority’s cuffs but in the custody of Authority’s words: words that provoke Ceez with seering implication. The play develops into a series of flashbacks, narrated and spoken only in verse, which complicate our and Ceez’s perception of truth. In the end, the mind really is the last frontier to conquer.

The parallels of this play and the current sociopolitical climate are not worn or guilt-inducing, rather a diverse audience can definitely enjoy the path of this particular man navigating ambitions. Ceez is a great character: smart, tough, unapologetic, and flawed. When he tangles with Authority, every subversive muscle tingles. While many blacks feel trapped by invisible and grandfathered power structures, that Ceez is actually trapped and still unmoving is perfectly ironic. The play is heightened by some amazing poetry, too. This piece is one of two premieres at the Poetic License: Subconscious festival at The Wild Project.

In one scene Ceez’s girlfriend Smiles (played ferociously by Eboni Flowers), finally spits a “true” rhyme: a story about rape and being heartbroken at a young age. Here the light is a single special against the wall, casting a simple circle around her head. As she recites, Smiles dips in and out of the light almost shying away from the pain, but maybe the freedom, this rhyme brings and it ignites some powerful moments later.

The production design is very strong -- that lighting cue, designed by Derek Miller, is one of many blinding moments. The show’s bare set is also provocative: Authority’s holding cell is the foundation for every other scene; there is no scene without a little Authority. Finally, there are video projections on the walls which assist the action beautifully, but can also give the audience pause. There’s one, which designer David Palmer creates, which only shows up during Authority and Ceez’s scenes. It’s a kind of twinkling wall that increases or diminishes as thought rises. It’s my theory the wall is really Ceez’s mind awakening to revelation from Authority. Either way, the show’s design creates another conscious level of experience that I found very engaging.

Paradox commits to a surreal story, but tells it with conventional theatre. In the preview I saw, the story was told out of sequence with some success. There is a part of the play that had to be explained to me by some people involved, but that didn’t bother me. I think the play needs tighter tracking of when the flashbacks happen and when we enter/exit a surreal state. Nevertheless, I believe this show is wildly accessible for theater blokes and novices alike. This play, and the Poetic License festival, is perfect for poetry lovers, social advocates, and conscious New York dwellers. Even if you’re none of those things, the characters are strong enough for you to latch onto their ambitions and flaws.

(Paradox of the Urban Cliché plays at The Wild Project, 195 East 3rd Street, through February 22, 2015. The performance schedule varies; please visit the website for the full schedule. Tickets are $18 and can be purchased at poetictheater.com or by calling 212-352-3101. For more information visit poetictheater.com.)