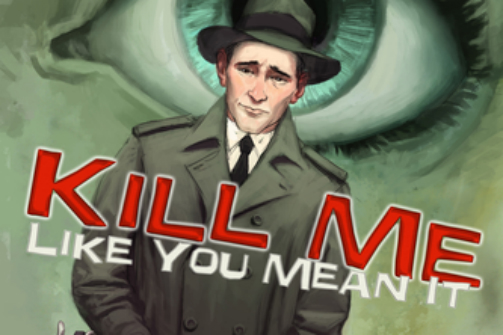 BOTTOM LINE: A high concept pastiche of film noir genre stereotypes that is hilarious when the stars align but could do with some tightening and cuts.

Billed as a "film noir for the stage," Kill Me Like You Mean It tracks the misadventures of Ben Farrell ("House of Cards'" Nathan Darrow) as he attempts to solve and prevent his own murder. The events depicted in a series of crime fiction sharing the piece’s title have been coming true and the latest issue involves Detective Farrell being shot in his office. The suspects are many and the plot twists are abundant in this hyper-stylized production that wavers between hilarious, evocative and incoherent.

Stolen Chair has produced several successful stage works in New York City, including the Drama Desk nominated The Man Who Laughs.  This gives a certain expectation of the quality of work to be presented.  And at first, it seems that the expectation would be met. As the audience files to their seats, a man in a period suit sings hits from the American Songbook with his back to the audience. The play opens with a solid piece of wordplay in Farrell’s first phone call with a mysterious client. But as the plot progresses, sequences get more and more bizarre to the extent that it begins to feel disconnected.

When the shenanigans on stage work, they work fabulously. An awkward pas de deux in a waterless bathtub between Darrow and David Skeist as Tommy Dickie, the author of the series, is the highlight of the style hitting home. Lydia Forsythe (Natalie Hegg), the editor of the crime fiction magazine, frantically typing away two keystrokes at a time is equally hysterical. Sarah Skeist as the femme fatale widow Vivian Ballantine -- Norma Desmond with a smattering of Patti LuPone -- also has a few moments that stand out.

Alas, not everything always works in this production. The scene changes are awkward and seem on the verge of being incomplete. This coupled with a few seemingly missed cues gave a feeling of the piece having lofty ambitions that could not quite be met at all times. That’s not to say it doesn’t make for a worthwhile outing (and potentially more than that as the nuts and bolts are tightened throughout the remainder of the run).

(Kill Me Like You Mean It plays at the 4th Street Theater, 83 East 4th Street, through March 8, 2015. Performances are Wednesdays through Saturdays at 8PM; Sundays at 7PM; and Mondays at 8PM. Tickets are $31.50 and $25 for students and seniors. To purchase tickets and for more information visit stolenchair.org.)