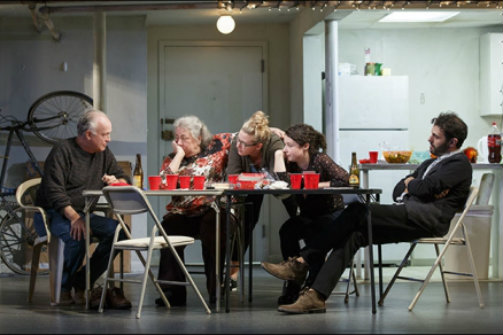 BOTTOM LINE: The Humans is a not-to-be-missed family dramedy; a sublime amalgamation of writing, acting, directing, and design.

Is there anything more delicate to navigate than a civilized Thanksgiving dinner with one’s family? It’s hard to imagine a setting more apropos for exploring the subtle finessing of relationships, the complex inner-workings of a tightly-knit clan, and the haunting omnipresence of one’s past choices. Stephen Karam’s latest drama, The Humans may take a pointed look at the Blake family, but it leaves the audience pondering our own familial interactions and generational divisions pertaining to wealth, religion, and relationships, among other topics. Oh, and it’s also a ghost story! The Humans wonderfully displays the expert craftsmanship and character renderings of this formidable working dramatist, and under the laser-focused direction of Joe Mantello with this sublime cast of New York theatre regulars, this haunting production is not to be missed.

With the recent announcement that The Humans is transferring to Broadway, I can’t imagine this stellar production is in need of more praise, but I’m hard pressed to think of something not gushing to say about this searing night of theatre, so here we go! The Humans takes place on Thanksgiving as the Blake family moves their youngest daughter Brigid (Sarah Steele, a brat with depth) into her two-level apartment in New York City’s Chinatown. This is not a glamorous two story apartment; David Zinn’s set depicts all too accurately this spacious though rundown abode, and Fitz Patton’s eerie soundscape captures every creaky floorboard, and thunderous bump in the night. As Brigid’s live-in boyfriend Richard (a fabulous Arian Moayed) whips up a turkey dinner to be served on paper plates, the rest of the family quips about mom’s diet, dad’s bad back, sister’s ex, grandma’s dementia and many other commonplace trivialities that are never trivial to the families they affect.

As tensions grow throughout dinner, truths inevitably become revealed and the Blakes are upended. But what makes this play so arresting is not only Karam’s peerless dialogue, or flawless rendering of the Blake family, but the ghost-like elements that gain momentum as the play creeps toward its conclusion. I was struck (in a very positive way) by the stylistic parallels between The Humans and Annie Baker’s John seen at Signature Theatre earlier this season. Certainly these plays are in conversation with each other, but on a larger scale it’s interesting to step back and observe two leaders of contemporary playwriting amp up realism to the point that it starts accessing the metaphysical; but that’s just a fun little digression.

While The Humans is largely a family dramedy, Karam gradually adds unnerving touches that are of the world of the play, yet otherworldly: lightbulbs burst, pipes clang, thumping noises grow, and at one point darkness envelopes the apartment. In the hands of a lesser writer the play might feel fractured, but Karam roots his metaphysics in the all too real world of the Blakes; though it may be scary to be alone in a rundown dark apartment, the fear of our own mortality and the ghosts of our unburied past are infinitely more terrifying.

Simply put, this is one of the finest assemblages of actors one can hope to see on the stage. Jayne Houdyshell and Reed Birney are two of best actors New York City has to offer, period. As the heads of the Blake household their portrayals are so authentic it feels like a disservice to even say they are “acting,” they just are. Cassie Beck, as the acerbic lesbian sister, delights one moment and breaks your heart the next as she uncovers the longing beneath her clever veneer. The sisterhood shared between Beck and Steele is another beautifully rendered element of the play. Moayed is a particular standout as the outsider boyfriend, and Lauren Klein as the dementia-stricken grandmother is nothing short of tragic.

Director Joe Mantello has not only steered this superb ensemble of actors, but designers as well, toward this magnificent production. Mantello’s deceptively light touch here wields all of his artist’s great work into a singular vision and makes some unforgettable stage pictures (often due to Justin Townsend’s lighting) in the process. In micro The Humans is about the Blakes, in macro it’s as encompassing as the title implies. See it at the Laura Pels Theatre, or see it on Broadway; but wherever you decide, just see it.