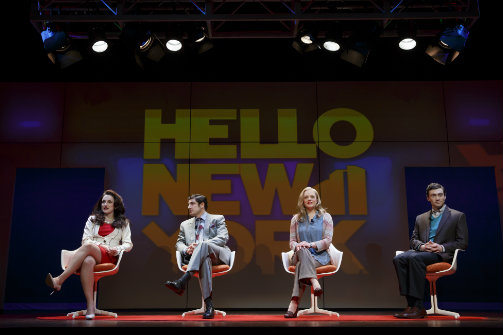 I think the main question for a lot of people seeing The Heidi Chronicles, which premiered more than a quarter century ago, is whether a play about the aspirations of the Boomer generation and the early years of the feminist movement -- that was very of-the-moment in the late 1980s -- will be dated now, or still feel relevant? My answer: yes to both.

Wasserstein introduces Heidi Holland (Elizabeth Moss) via a lecture hall in 1989 where she’s giving a talk to her Art History students about a host of female artists completely absent from their textbooks. The scene goes on a little long, but the playwright effectively sets up Heidi as someone passionate and funny without being pedantic. Of a portrait she’s showing to her students she remarks, “[it] can be perceived as a meditation on the brevity of youth, beauty of life. But what can’t?”

Cut to Heidi as a high school student as she instantly connects with Peter Patrone (Bryce Pinkham) at a dance although she’s actually on the sidelines with a book (Death Be Not Proud). Peter introduces himself by complimenting her, saying, “You look so bored you must be very bright.” Later, after they sweetly banter, he says, “I want to know you all my life. If we can’t marry, let’s be great friends.” He’ll prove to be her gay best friend and the one true constant in her life.

At a Eugene McCarthy rally in 1968, she encounters Scoop Rosenbaum (Jason Biggs), the other significant man of her young adulthood. They meet cute as they listen to Janis Joplin, who he gives an “A-“ (his thing), but only a “C+” for The Holding Company. He’s arrogant and charming as he challenges her politics and tells her he knows her type: a Seven Sisters student (Vassar) who is “neat and clean for Eugene...We’ll all be good people and wars in places you’ve never heard of before will end.” He envies that she’s a “serious good person... a True Believer” who must stand up for herself because she’s “the one this is all going to affect.”

The years pass and Heidi sees the benefits and hardships that come with trying to remain a True Believer of feminism. She fights to find and define her place as a woman amid feminist consciousness raising, the defeat of the ERA and the success-driven '80s, and to hold onto her surrogate family of friends as many undergo radical shifts and abandon ideals. Her high school and college best friend Suzy (Ali Ahn) goes from living and working on a women’s health collective in Montana to becoming an utterly compromised, soulless Hollywood television executive who neither understands nor cares to know what’s happening on the front lines of the women’s movement.

As the timeline progresses, Wasserstein is much tougher on the female characters. Suzy is a grotesque caricature, and the other women, who appear during the baby shower and talk show scenes, are either unhappy and/or superficial. For audiences today, some of her ideas about women and feminism, as conveyed through these characters, come across as more absurd and unbelievable than as satirical or critical.

Pinkham is very winning and owns the show. His hilarious antics during the wedding scene are a particular standout. Peter is arguably the best and most complex part: he has his own needs, is unafraid to call Heidi on her BS and isn’t around just to offer Heidi unconditional support or snappy comebacks as her gay BFF. Biggs, a long way from American Pie and "Orange is the New Black," has good comic timing and is likeable even though his character is a money-loving philanderer. Tracee Chimo, who plays a number of roles, including uber lesbian feminist Fran and clueless talk show host April, is terrific. Moss perhaps has the toughest part since she’s the observer reacting to everyone else. I don’t know if it’s owing to her petite frame and girlish voice, but sometimes she seems too young for the role. But Moss puts a great deal of heart into her performance, especially the emotional showcase toward the end when she has a breakdown at an alumni function for her all girl high school.

Director Pam MacKinnon has created a lively production with a lot of laughs. The first half has a better flow than the second, which drags in places. John Lee Beatty’s set design is great, from the rotating stage that brings the action forward to the colorful, detailed sets that lift in and out.

I’m not sure that I always understood or agreed with Wasserstein’s interpretation of feminism and the women’s movement, which are far more evolved and nuanced today. After all, when she wrote the play, it was a post-Ferraro world and having a female President would have been unimaginable. But more than 25 years later, it’s a provocative show that still sparks a lot of thoughtful, intelligent debate.