Off Broadway, Dance
Runs through 5.24.15
The Joyce Theater, 175 Eighth Avenue 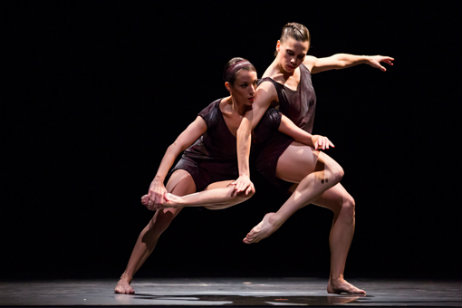 Hubbard Street Dance Chicago’s Program B starts off strong with verve and a fondness of all things European. The first piece of the evening, Jiří Kylián’s Falling Angels, showcases an all-female cast of eight women who, with sharp arrested movement, mimic the percussive drum beat of Steve Reich's music. Kylián’s work is stunning as the women make the technical aspects of hitting an architectural shape with precision and speed look easy. This piece starts as an abstract idea, but as it progresses into duets and solos, it feels like a somewhat dated look at feminine communities: the women have sudden outbursts that seem like tantrums and then fade back into the group. It is still poignant and clearly a wonderful piece for the dancers to showcase their talent.

Alejandro Cerrudo’s pieces make up half this program (and also half of Program A). As he's the company's resident choreographer, Hubbard Street Dance is clearly showcasing his work (Cerrudo also dances in the last piece of Program B, Nacho Duato’s Gnawa). Cerrudo's first piece of the evening is PACOPEPEPLUTO, a work for three virtuosic men. The men are basically nude –  they're just sporting dance belts – as they dance solos to typical American music including “That's Amore," “In the Chapel in the Moonlight,” and “Memories are Made of This.” The saccharine songs are made much less so by the liquid rippling of muscles of the male dancers. The visceral qualities combined with the familiar music makes for an enjoyable dance that relies almost exclusively on the impressive dancing of Johnny McMillan, David Schultz and Jonathan Fredrickson.

Cerrudo’s second work of the evening, The Impossible, begins with the fabulous mover McMillan in a clown face, smoking a cigar with a red ball. There is little use of the ball and cigar after all the setup and is more of a cliché than anything else. The highlight of the piece, and of the evening, is a wonderfully playful duet. Ana Lopez and Jonathan Fredrickson dance as if they are old folks flashing back to younger times. They are literally pulled up out of their sinking backs into a tender duet by another couple that seem more like puppeteers wielding Lopez and Fredrickson as puppets. The transition from the youthful character in their bodies to the decrepit withering one is powerful and magical. The two dancers seem to suspend time and then rapidly seep back into their sad present. Unfortunately the duet morphs into a quartet with the controlling couple changing partners which breaks the spell that Cerrudo has cast. There is a scene where the mother shoots the first character up against a painting and then the father folds down the painting to form a table. A table dance ensues and the choreography feels rather forced here. The woman recalling her childhood looks back and is tormented and pulled and lifted up by a group of men who grab and hold her back by her face. If the goal is to make the general audience feel like they are missing something, then it succeeds.

The last piece Gnawa, choreographed by Duato in 2005, exoticizes Gnawan culture and music; Gnawa is described as tapping into the spirit of Mediterranean spirit of North Africa and native Spain. As Morocco and Spain are geographically quite close, this subtle combination is seen in the costumes: black flamenco dresses for the women and colorful silky pants for the men. Gnawa begins as a balletic couple walks slowly away from the front of the stage; as an overarching theme, it seems to be reminiscent of the soul. The dancing itself is pleasant to watch and looks not unlike other signature Duato pieces like Jardi Tancat with angular arms, sweeping partnering, and grounded travelling phrases. Candles border the front of the stage and create a romantic mood that sets the tone for these beautiful, capable dancers to showcase these European favorites.

(Hubbard Street Dance Chicago plays at The Joyce Theater, 175 Eighth Avenue, through May 24th, 2015. Remaining performances for Program A are Thursday and Friday at 8; for Program B the final performances are Saturday at 2 and 8 and Sunday at 2. Tickets are $19 - $59 and are available at joyce.org or by calling 212.242.0800.)