Written and directed by Ariel Stess
Co-Produced by New Georges

Off Off Broadway, New Play
Runs through 5.30.15
The Bushwick Starr, 207 Starr Street, Brooklyn 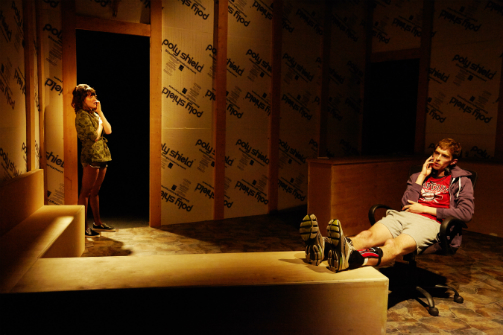 Sometimes in life, you get lost. The heart is a lonely hallway. Uncertain of your path and completely uncomfortable in your own skin, you cling to whatever you can which makes the dread slightly less unbearable. Often times, and for a great many people, those things may include the comforts of home, family, work, dating, nature, and retirement. Retirement is a fascinating concept, suggesting finality, the end of the road, the beginning of the twilight years, and yet its construction almost hints at the possibility of returning (re-tirement taps oh so close to 'return' on the tongue, don't it?). But a return to what? To the things that lead us to the place where we became lost?

And so it was I found myself contemplating retirement in the spare shell of the home composed of plywood, fiberboard, the dull cold metal of kitchen sink -- Meredith Reis's set excavates the soul of a house -- of Stephen (Richard Toth) and his second wife Stella (Mary Rasmussen). Inside the skeletal home, our everydad aids his wife in preparing for the sale of their home, and the impending company meeting which they are hosting. The company, F-S-S (Family Spaces Seriously), is composed of a trio of men named Brell (Paul Ketchum), Mell (Seth Clayton) and Kell (a scene stealing Noel Joseph Allain), all of whom arrive late to the meeting.

Meanwhile, Stephen's daughter Stara (a standout Keilly McQuail) unexpectedly arrives to ask her father for advice on what to do about a recent break up. Stephen offers the most hilariously sad response, "Try not to be alone ever." In the background, Stephen's estranged son Stammy (Clayton again) begs for his father's attention. As the evening wears on, the company meeting turns into a fast-paced game of ‘Truth or Dare,’ where embarrassing secrets are revealed.

There are so many layers going on throughout the show. Eric Southern’s stark lighting casts deep shadows upon Reis’s purposeful design. And there is, oh so faintly, the gentle buzzing in the air (courtesy of sound designer Chris Giarmo), pulling us deeper into their world. But all the while, my mind wandered (or, wondered) about the ethereal, temporal nature of this messed-up life people make for themselves and for each other.

I'm afraid I'm not doing Ariel Stess's daring Heartbreak justice. First of all, it's funny, despite my soul-searching spiel. Stess's language is yet another playground for which this talented sextet of performers may explore, and you get the sense that they enjoy it. Throughout the play are word motifs, jumbles and echoes of extended syllables, as if everyone shares not only the ability to communicate their needs/desires, but also moments of stasis in existence. For a long portion of the show, Stephen lies prostrate on the ground, not speaking, not engaging. There is presence but not life. There is humor in such sadness with which we must make friends of in order to endure this world.

(Heartbreak plays at The Bushwick Starr, 207 Starr Street, Brooklyn, through May 30, 2015. Performances are Wednesday thru Friday at 8; and Saturday at 2 and 8. Tickets are $18 and are available at ovationtix.)