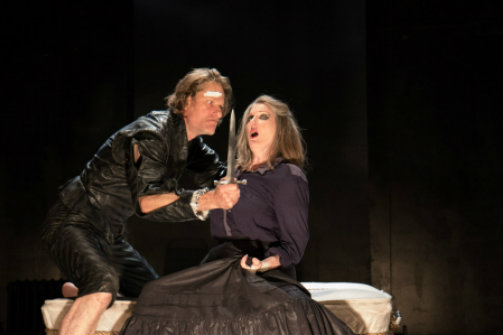 Michael Laurence and Annette O'Toole in Hamlet In Bed. Photo by Tristan Fuge.

BOTTOM LINE: Laurence, O’Toole, Shakespeare and Oedipus get it on.

Mothers and sons, both real and Shakespearean, are at the heart of this darkly comedic drama. Michael (playwright Michael Laurence) is a near-40 actor who can’t commit to his long-suffering girlfriend, Mary. He’s the type of man who believes sleeping with someone else is nothing more than flirting. He saves his passions for The Bard and thinks “I am Hamlet and Hamlet is me.” When he’s not channeling the Dane, he’s in pursuit of finding the birth mother who gave him up when Michael was a newborn. He is, unsurprisingly, desperate to do "The Closet Scene" between Mother and Son (Act 3, Scene 4). Laurence, blond-haired, lanky and clad all in black, captures the narcissistic, entitled man-child without making him tedious or unlikable.

His twin fixations come together one night when a friend hands him a diary by a young actress named Anna May Miller (Annette O'Toole), who had once played Ophelia. It’s here we’re introduced to Anna through her disembodied voice as she recounts the heady days of acting opposite her boyfriend who played Hamlet in a notable production 40 years earlier. A teenage Anna becomes pregnant and the last entry is from February 11, 1976 as she’s about to give birth and hand over her baby. Michael reveals he was born February 12, 1976 and is convinced Anna must be his mother.

After tracking Anna down, he spies on her, crossing paths as she’s thrown out of the latest dive bar. She sees him and asks for a light, saying, “I look like a hundred miles of bad road.” If it were a Saturday night she would be in the throes of picking up a man after throwing three fingers back, something she does every week. Shorn of her trademark scarlet mane, O’Toole appears suitably weather-beaten but also with a touch of Debbie Harry-esque gray hair be damned. Her Anna has some toughness and spark. After following her undetected to work and home Michael concludes that he “needs a way to know her, without her knowing me.” He conceives of a “conceit/deceit” in which he will stage Hamlet and have Anna play Gertrude because of course, the play’s the thing.

After she “auditions” and gets the part, they rehearse and slowly bond with each sharing memories of abusive households and running away as kids to New York where acting saved them. But Michael’s primal needs run deep and it’s clear as he becomes increasingly single-minded and manic, that only a mother can fill them. Anna, however, while haunted by her lost child, does not cling to Michael in the same way, seeing the play as just that. For her, acting again kicks up something inside of her that had been dead and she is awake for the first time in decades.

Utilizing a few props, lighting and some offstage music, director Lisa Peterson, along with scene designer Rachel Hauck and props master Zachary Serafin, create an effective noir atmosphere, especially when Michael and Anna are walking the streets of Manhattan in the late hours of the night. Throughout, Peterson has Michael and Anna do their cross-cutting monologues on the microphones when they’re addressing the audience, which works well to convey their points of view.

The ending, which is really ambiguous, may leave audiences dissatisfied, and the characters aren’t given the opportunity to demonstrate much growth. I think O’Toole—who brings some fire to the role of a woman in her 50's who is down but ultimately not out—has been given an underwritten part. That being said, both actors hold the stage and are fun to watch as the two tussle.

(Hamlet In Bed is at the Rattlestick Playwrights Theater through October 25, 2015. Performances are Thursdays through Saturdays at 8 and Sundays, Mondays and Wednesdays at 7. Tickets are $35 and available by at ovationtix.com or by calling 866-811-4111.)