Off Off Broadway, Play
Runs through 10.10.15
University Settlement, 184 Eldridge Street 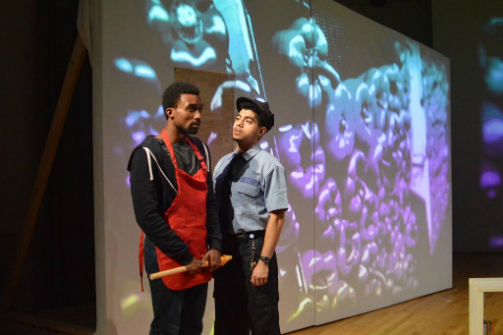 BOTTOM LINE: Radical Evolution’s The Golden Drum Year is an artsy, expressionistic love poem to a diverse and dynamic NYC, and to anyone who’s searched for their purpose and their people in a new city.

In its world premiere production, The Golden Drum Year lives up to playwright Beto O’Byrne’s vision for the play as “an interactive, 3-Dimensional Art Installation [sic], utilizing music, video, and other artistic mediums to give people a richer, more in-depth experience,” as he writes in the program blurb. Indeed, in Radical Evolution’s production, each scene is like a snapshot, a moment frozen in time and then extrapolated and distorted to find its deepest meaning, as though everyday life in New York were up on a museum wall for us to ponder. In this way, the play is a lot less concerned with creating a narrative arc than it is with exploring the poetry in everyday, ambling lives in New York City. Seasons change, people change, good times and bad times come and go, and in the end, one can either observe and reflect on life as it whooshes past, or actively engage with their world.

The very loose story follows Eugene (played by a charming Allan K. Washington) as he searches for life’s meaning over the course of his first year living in NYC. He gets his start working in an Upper West Side grocery store with a colorful and over-qualified crew including: Lisha (Tia James), the cashier who can’t put her phone down; Jero (played with gusto and nuance by Fernando Gonzalez), the unsettled veteran now working as a security guard; Jackson (Andrew Belcher), the struggling artist who survives on his day job; and of course, Xochi (played by a graceful Zuleyma Guevara), the manager with an understanding smile, a heart of gold, and feet that always want to dance. Eugene finds his tribe in this unlikely bunch, and together they philosophize, celebrate new beginnings, mourn losses, manage anger, and marvel at the quirky grocery store customers (like Perdita, played by an intriguing Sonia Villani) along the way to finding purpose.

Though the ultimate payoff of Eugene’s coming-of-age story may be a bit trite, O’Byrne’s skill in finding poetry in ordinary moments and misunderstood people makes the journey a pleasurable one. And, by splitting the play’s focus between each member of the ensemble rather than only concentrating on one protagonist, O’Byrne reveals perspectives that are often left unheard and asks us to imagine a more open, understanding, and communal version of the NYC we know.

Though the “new kid moves to NYC” trope pops up time and time again across New York’s new works scene, the audience still seemed to enjoy and appreciate moments of familiarity throughout the play. At certain moments the night I attended, there were even audience members who verbally responded to Eugene’s narration with shouts of solidarity (which Washington seemed to delight in, as he worked the unexpected audience interaction into his performance). It is also worth noting that The Golden Drum Year depicts a much more authentic-looking NYC than most other “new to New York” stories, with its integration of multiethnic characters and stories informed by mixed identities. This emphasis on diversity, besides embodying one of Radical Evolution’s central tenants, allows us to see a rhythm of the city often passed over in mainstream storytelling, and emphasizes the play’s theme of understanding and being open to unfamiliar experiences.

Aesthetically, The Golden Drum Year’s design embraces O’Byrne’s image of the piece as an art installation. Dede M. Ayite’s minimalistic set and David Bengali’s dynamic projection design beautifully transform the space, with elemental representations of each location blown up to an epic scale. Ayite’s central set pieces are four panels of walls that predominantly angle out to complement the theater’s depth. Though these walls remain plain and utilitarian when they are not being used as projection surfaces (perhaps to mimic the plainness inside the UWS grocery store), when actors begin moving the walls for certain scene changes, the fluidity of these transitions and the visual impact of the playing space changing shape beautifully justifies Eugene’s awe at his dynamic world. Bengali’s projections also add an expressionistic quality to the world, by presenting images of the NYC we know at unexpected angles or with slight manipulations. With this technique and some very clever visual storytelling, in the play’s final moments Bengali reveals a larger message about the characters’ psychological progressions throughout the play. Yuki Nakase’s lighting nicely complements both the set and the projections, and Jonathan Camuzeaux’s original music and sound design bring clarity to the minimalistic production and deeper visceral meaning to O’Byrne’s poetic text.

The Golden Drum Year is a lovely piece for a contemplative evening, for those who are less attached to traditional Aristotelean storylines. Radical Evolution has created a beautiful celebration of NYC itself, of the diversity in our city, and of people finding themselves in the most unlikely places.