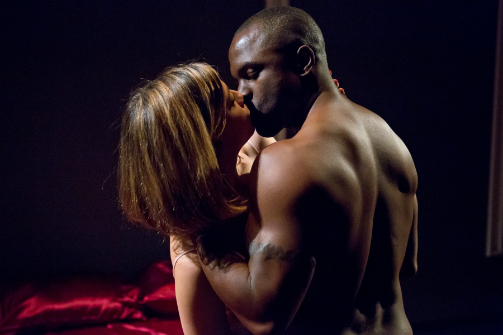 BOTTOM LINE: Noisy neighbors, a new condo, and trying to make partner at his law firm add up to be quite frustrating for Michael. This modern production takes sex on stage to new heights as Michael tries to find happiness.

Every step Michael (Gbenga Akinnagbe) makes in his life is infused with the desire for happiness. When he is having sex in a stairwell and is told “I want you to fuck my face the same way you'd fuck my pussy,” that makes him happy. A promotion to partner would surely also make him happy, as would a new condo in Soho. Uncovering discrimination and standing up for yourself may also lead to happiness. The elusive question at the heart of Fulfillment is, what makes us happy?

Michael is a lawyer. Specifically, he is a senior associate. His hard work and dedication to his firm make us (and Michael) wonder why he is not yet a partner. Surely his drinking problem has gone unnoticed. And I would hate to think that his boss is racist. Michael does not always follow the rules, though, seeing as he is sleeping with his co-worker, Sarah (Susannah Flood). Sarah is a strange bird herself, with thick glasses, very frank sexual desires, and evident intelligence. She brings Michael to her meditation group, and explains how when frustrating things occur he can still control his reactions. She has seen the devastating effects of alcoholism in her father and dearly departed brother.

Sarah's prayers and Michael's guidance from AA seem to be working. After spending one point five million dollars on a new apartment and being woken up by his upstairs neighbor's kid every morning he really needs to utilize that new skill set and breathe and meditate before he blows a gasket.

Writer Thomas Bradshaw and director Ethan McSweeny create a fun, cohesive world with Fulfillment. It is modern New York City with high powered characters and actors who make hard work look effortless. The incredible Brian Sidney Bembridge adds his scenic and lighting design skills including  eight foot tall vertical cylindrical lights backlighting the stage for a brilliant effect. All together it is a sleek, graphic world. Fast-paced and edgy.

Fulfillment uses a tried and true formula of sex, booze, and the corporate environment. What is interesting is how the show pushes the envelope to incorporate Bradshaw's signature shock factor. Even more eyebrow raising scenes are turned out than one might expect. The sexual encounters are so much more detailed than any I have ever seen on the stage, with the specific work put in by sex choreographer Yehuda Duenyas. I must admit, it is fun seeing attractive people enjoy themselves, especially when Mr. Akinnagbe, who resembles a Greek god, is in that category. So all we need to know now is the answer to Michael's best friend Simon's (Christian Conn) question. “So, did you fuck her face?”