By Christopher B. Latro; Directed by Anna Bamberger
Produced by Rosendorf One Productions 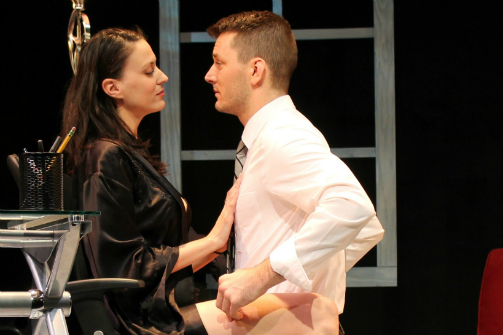 The first character we meet in Christopher B. Latro’s new play Devoted Dreams is the master of the universe (Shelley Valfer), a deity unspecific to any particular tradition. Costume designer Michael Alan Stein has him dressed in a long smock that looks like a mix between pajamas and a hospital gown, and so I spent the first 15 minutes of the play wondering if I could trust this deity, or if he might end up being a patient at Bellevue. This question, however, kept me listening intently through the opening scene, so kudos to Stein for creating this healthy confusion.

Our deity turns out to be legit. In the first scene he ponders whether free will in humans is a good thing. Realizing that he knows nothing about what motivates people, he sends his son, Silver (Michelle Girolami), to learn more about the mortal world. In human form, Silver looks like an innocent little boy from a 1950s family sitcom. When Eva (Sarah Swift), an unhappy homemaker, finds Silver alone in a park, she takes him in out of an unfulfilled desire to have children of her own. Eva’s life is a mess with her husband, Alexander (Brandon Alan Smith), not only cheating on her but also wrapped up in an embezzlement scheme.

The play asks interesting questions about what makes for a fulfilled life: love, sex, professional success, wealth, offspring? In a heartbreaking scene, Alexander indicts his loving and attentive father (also played by Valfer) for being unsuccessful and vents his terror of ending up just like his old man. We feel tremendous compassion for the father who silently wonders why professional success is figuring into his evaluation as a parent.

Most of the actors in this ensemble are double-cast, which allows them to flex their muscles and show off their range. Sarah Swift stands out, simultaneously playing the unfulfilled wife and the husband-stealing mistress. Stein’s costumes aid Swift’s transformation by allowing her to disappear behind a plain frock for much of the play and then highlighting her beauty in sexy lingerie during the more sinister scenes. The production’s most entrancing performance though, belongs to Michelle Girolami as the adolescent Silver. Girolami captures the innocence of youth without cliché by fully immersing herself in the childlike actions of questioning and trying to understand everything.

While I enjoyed the play, it feels long at 90 minutes, with no intermission. This is because Latro weighs it down with superfluous details about business transactions that we never fully understand. All we need to know is that Alexander is behaving dishonestly, but Latro is determined that we grasp the nitty-gritty details. In the end, I found myself utterly confused about the business and somewhat annoyed that I spent so much time hearing about it. The play would benefit greatly from some cuts and maybe an added conclusion in which our deity understands something new having completed his experiment. As it is, the play ends without satisfying closure.

If you like theatre that asks questions, you might want to check out Devoted Dreams. Your appreciation of the play will be enhanced if you happen to be entering, or are in the midst of, your midlife crisis.