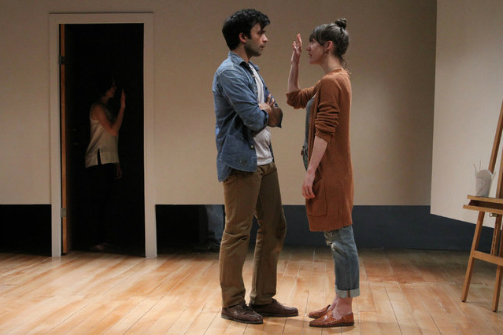 BOTTOM LINE: A funky meditation on not recognizing your life as you left it.

Deb (Brooke Bloom) thinks she's buzzing a friend up to her apartment. Turns out it's a burglar who walks off with Deb's wallet and computer. This disorienting invasion of privacy has a lingering psychological effect: it seems that Deb can't recognize anyone in her life anymore.

Commiserating with her boyfriend becomes a curious encounter as Karl -- originally played by Nick Choksi -- leaves the room for a minute then returns, now as actor Geoff Sobelle. Deb is confused but she goes with it. The same thing happens when she begins a new job as an assistant for Mark, a prominent artist. First it's Sobelle as the ego-driven boss, then Choksi, and later Stacey Yen, who is also sometimes Julia, the office manager.

If Jerry Lieblich's D Deb Debbie Deborah sounds schizophrenic, it is, for both Deb and the audience. But with meticulous direction by Lee Sunday Evans, the confusion always feels self-contained. Evans is an expert at quirky staging (she just won an Obie for A Beautiful Day in November...), and she excels with this material, choreographing each step and gesture so the characters remain consistent even as the players change.

Though the play is inherently confusing, it never feels out of the audience's grasp. Evans also employs some clever slight-of-hand trickery, thanks to smart sets by Brett J. Banakis. The walls have a sizeable gap at the bottom, so the audience can see the actors feet as they cross behind the set. This becomes a clever tool of misdirection as the person entering might be not be who you expected at all.

D Deb Debbie Deborah builds on itself until 5 actors dexterously bounce between the characters, interchangeably. Karl is also going through a tough time -- his mom is in a coma -- and tortured artist Mark has his own struggles. We get a glimpse of their troubles, and lo and behold the characters shape-shift here, as well. Eventually even Deb herself is played by any and all of the game performers. A very slick scene transpires at an art opening for Mark as the actors deftly pinball themselves around the stage, morphing from one party guest to the next to the next to the next to the next.

(D Deb Debbie Deborah plays at The Wild Project, 195 East 3rd Street, through May 30, 2015. Remaining performances are Wednesday through Saturday at 8. Tickets are $18 and are available at artful.ly.)