Danny and the Deep Blue Sea

Off Off Broadway, Revival
Runs through 10.11.15
Theater for the New City, 155 First Avenue 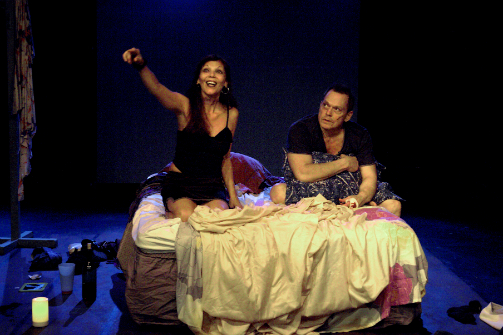 Susan Mitchell and John Talerico in Danny and the Deep Blue Sea. Photo by Peter Welch.

BOTTOM LINE: This taut, riveting, and well-acted drama brings two psychologically fragile people together for a night of romance and danger.

Long before John Patrick Shanley won a Pulitzer Prize for Doubt in 2005, and long before he was a Drama Desk, Golden Globe, Obie, and Tony award winner, his second play, Danny and the Deep Blue Sea, opened off Broadway. Critics loved it, calling it “deeply intimate and frightening,” “pithy,” and “dark and dirty.”

31 years later, it’s still all of these things. It’s also a powerful—and timeless—look at the ways humans connect, despite differences, pathological neediness, or guilt over missteps and mistakes in judgment.

The action begins in an unnamed bar as two patrons, Roberta (played with provocative despair by Susan Mitchell) and Danny (played with gruff fury by John Talerico), eyeball each other from their respective tables. It doesn’t take long for the flirting to begin. Nonetheless, from their first verbal exchange, it’s clear that both are troubled. Roberta’s hand shakes as she repeatedly taps the table, a nervous habit that she seemingly can’t control. Although she’s well dressed, something about her seems off, unstable. Danny, meanwhile, is wearing blood splattered clothes; his face is filthy, and his oozing hand is wrapped in gauze.

Danny’s volatility is immediately evident. He rants, he rails, and he threatens foes both real and imagined. His macho demeanor and thick Bronx accent—occasionally making his rapid-fire speech unintelligible—rival that of any theatrical or literary he-man. He’s brash, impulsive, and always ready to fight. For her part, Roberta is both a sultry temptress and a sassy little girl, but her exterior begins to crack when, for no apparent reason, she chooses to tell Danny about the guilt and shame she feels over a long-ago act of sexual impropriety. As she confesses, Danny softens, and once the pair retire to Roberta’s bedroom, a night of love-hate passion unfolds.

It’s gripping and powerful, and the actors have the chemistry needed to make this improbable dance wholly believable. There’s tenderness and rage, heat and pathos on display. What’s more, the play is filled with themes that will be familiar to Shanley aficionados.

In fact, Danny and the Deep Blue Sea—a reference to Danny’s fantasy of building a boat and sailing off into the sunset—showcases the playwright’s belief in the healing power of love, the lasting impact of sexual misdeeds, and the role of anger in keeping people apart. Throughout, working-class characters teeter on the edge of cliché but don’t succumb to oversimplification.

Thanks to Mark Marcante’s simple set design—there are two distinct scenes in this one-act production, the first in a no frills barroom and the second in Roberta’s barely-decorated boudoir—this character-driven drama underscores the power of humans to comfort one another, however clumsily. And while there’s plenty of grit in this compelling drama, there’s also tenderness and beauty.

All told, Danny and the Deep Blue Sea is a well-performed look at lust, love, and human possibility. It’s a top-notch revival.