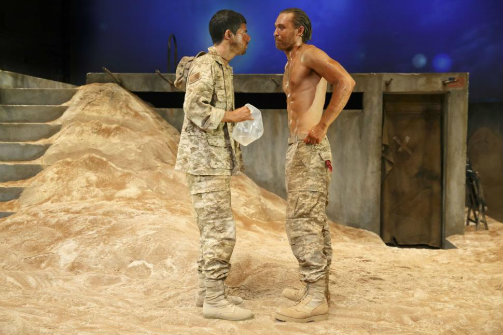 BOTTOM LINE: The machismo of the modern-day warrior is exposed, and the folly of war revealed, in this explosive and intense new drama.

As you enter The Gym at Judson, you trudge to your seat through sand. It’s a small inconvenience compared to that endured by soldiers, and it quickly fades once the play begins and the atrocities and stresses of war are unveiled. In one early scene, for example, two soldiers, Smith (played with a terrifying mix of volatility and unsuppressed rage by Seth Numrich) and Leadem (Brian Miskell) are lurking outside their brightly-lit, silt-covered bunker, warily swapping stories and experiences. Smith’s macho posturing, punctuated by a string of non-stop profanities, is instantly evident. Leadem – young, scared, restless, and uncertain – makes an easy foil for Smith, whose blustery persona allows Smith to dominate his fresh-faced, twenty-one-year-old peer. Later, a third soldier joins the duo. Named Miller (Chris Stack), he has been wandering in the desert since the unexplained death of his entire squadron. He’s shell-shocked, lonely, and lost.

The audience is never told where this unnamed sand pile is located, or why the soldiers have been stationed there. What’s more, there is no actual storyline. Instead, disjointed vignettes, punctuated by gun fire, bombing, flashes of bright light, and random noises, slowly unfold. Throughout, a Serbian woman (Jelena Stupljanin) portrays War’s Victim. A rape survivor whose entire family was annihilated, she periodically pops up to illustrate the civilian toll of armed conflict. Her shrieks are piercing, and though she alternates speaking in Serbo-Croatian and English, viewers do not need to understand her words to ascertain their meaning. She’s riveting.

That said, this is a play about men and the ways they rationalize and glorify nationalism and conflict. Conquest is writ large, both politically and socially. In fact, the play’s relentless sexual boasting – Smith either relives an affair with Leadem’s mother, a damaged and fragile single mom (well played by Kathryn Erbe) or shares his fantasy about what such an affair might have been like – is simultaneously disturbing and humanizing, allowing the audience to get a glimpse of the man in an unguarded state.

But these moments are rare. In their stead are chaos, rampant tension, and senseless competition and fighting between characters (choreographed by UnkleDave’s Fight House). There’s also gut-churning drama as the soldiers grapple with the end of their supplies and their inevitable death from dehydration. Blackouts between scenes elevate audience disquiet as does the jarring industrial music that erupts at random moments. It’s intentionally unsettling, a reminder that this is immersive theater, not meant to comfort or entertain.

At the same time, this provocative, thoughtful play will leave audiences wondering why we send our young to distant lands to quell conflict. Indeed, whether we’re battling “enemies” in Africa, the Middle East, or on domestic soil, Afghanistan, Zimbabwe, America, Kuwait pushes viewers to question whether violence is the only, or best, way to mediate disagreements. In addition, the fact that Leadem, Miller, and Smith have no idea why they have been sent to the desert, or what they were expected to do while stationed there, underscores the absurdity of twenty-first-century militarism. Writer-director Talbott’s touch is light; nonetheless, viewers will likely leave thinking about the human cost of war as well as the social price of these expenditures.

(Afghanistan, Zimbabwe, America, Kuwait plays at The Gym at Judson, 243 Thompson Street, through June 27, 2015. Performances are Tuesdays at 7; and Thursdays through Sundays at 7. There is no performance Saturday June 13. Tickets are $45 for adults, $10 for students. They can be ordered at rattlestick.org or by calling 866.811.4111.)