By Sean Graney; Directed by Brian Gillespie
Produced by Pull Together Productions 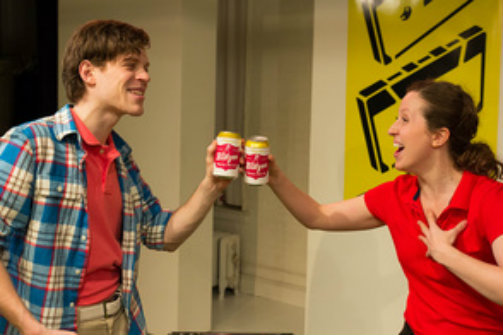 David Andrew Laws and Jane May in Twelve Nights. Photo by Nicholas Moran.

BOTTOM LINE: A fun adaptation of one of Shakespeare's classic comedies has plenty of '80s tunes but needs more '80s excess.

Sometimes a show can be alienating by going over the top, and sometimes a show can not go far enough. Twelve Nights is a charming little play performed by a skilled and affable cast, but it needed just a little more oomph to feel complete. When you set a show in the 1980s, you shouldn’t be afraid of excess.

Adapted by Sean Graney from Shakespeare’s Twelfth Night, Barnabe Riche’s Apolonius and Silla, and the anonymous Italian play Gl’Ingannati, Twelve Nights is basically a retelling of the Bard’s classic gender-bending comedy. The Duke Orsino is still in love with the melancholy Olivia and still employs Cesario (Viola in drag) to woo her on his behalf. This adaptation sees the Duke compiling romantic mixtapes and Olivia drowning her sorrows in The Smiths. There is also a pirate and he sounds like Keanu Reeves.

A cast of four (David Andrew Laws, Jane May, Robin Rightmyer and Amanda Tudor) plays over thirteen parts. Interestingly, Laws plays Viola/Cesario in a callback to the days when “pants roles” were men playing women playing men. May and Tudor also stretch their genders in such roles as Malvolio and “Simon Sickencheek” (basso-voiced Rightmyer was probably deemed too manly to play a woman). As directed by Brian Gillespie, the cast flits in and out of roles at breakneck comic speed. There are clear clown and commedia influences in this production and the cast ably performs some rocking '80s tunes to great effect.

The frantic energy of a well-directed cast and a nostalgic soundtrack, however, cannot make up for the show’s half-formed aesthetic. Aside from the music, a couple of neon posters and some wonderful lemon legwarmers sported by Malvolio late in the show, there was nothing to indicate that Twelve Nights takes place in 1988 (as stated in the press release). The cast wears simple uniforms of khaki pants and polo shirts and there is little in the way of a set other than a shag carpet and mini-fridge (no costume or set designer was listed in the program). Perhaps budgetary concerns kept Twelve Nights from going full-on Jem and the Holograms, but when I see a show set in the ‘80s -- especially a no-holds-barred screwball comedy -- I expect more. Crimped hair, acid-washed jeans, jellies: I want it all! Twelve Nights is a crazy show and it deserves to completely embrace its craziness. I would love to see Pull Together Productions remount this show in the future with this same cast but with a less conservative approach in its design.

Twelve Nights has a strong script and a top-notch cast, and it’s so close to feeling like a fully realized production that it might drive you a little nuts. Still, there are beers available at the front door and a built-in drinking game throughout the show. It’s a lot of fun to be sure, but for me it was not enough.

(Twelve Nights plays at Theaterlab, 357 West 36th Street, now through December 14, 2014. Performances are Thursdays through Saturdays at 8PM; Saturday, December 13th at 10PM; and Sunday, December 14th at 7 PM. Tickets are $18 and are available at ovationtix.com.)