Written by William Shakespeare; Directed by Hamilton Clancy
Produced by The Drilling Company

Off Off Broadway, Play Revival
Runs through 7.26.14
Municipal Parking Lot, at the corner of Ludlow and Broome Streets 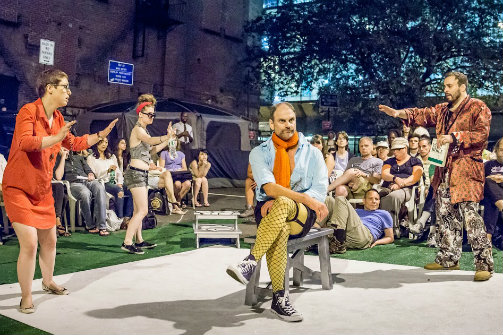 BOTTOM LINE: A bare-bones but charming production of The Bard's classic comedy of misunderstanding, nestled between parked cars.

Not all free Shakespeares in New York are sumptuously designed, star-studded spectacles for which you have to wake up at five in the morning to get tickets. Some -- if not most -- are low-budget passion projects performed by talented unknowns with very reasonable seating policies. Just as New York should have room enough for the cushy one percenters and the huddled masses yearning to breathe free, so should there be space enough for free outdoor Shakespeare of all kinds. That’s my ideal urban utopia.

Through July 26th, The Drilling Company's "Shakespeare in The Parking Lot" will present William Shakespeare’s cross-dressing classic Twelfth Night for the agreeable price of FREE. Founded in 1995 by Expanded Arts, Shakespeare in the Parking Lot has performed at the same municipal parking lot on Ludlow and Broome Street each summer. Now in the stewardship of The Drilling Company, this will be the company’s last year in this particular play space, as the lot and surrounding buildings will be demolished to make room for an “urban renewal project.” Just writing that makes me want to punch something, but I will save my anti-gentrification angst for another time (she wrote in a trendy Astoria coffeeshop).

I saw Twelfth Night in optimal viewing conditions: the night was clear, the humidity was minimal, and the audience was large and boisterous. Those who had gathered to watch Twelfth Night were a mix of young and old, long-time LES residents and bright eyed aspiring New Yorkers. During the course of the show, passersby would stop to watch, often accompanied by family and/or well-behaved dogs. It was clear from the get-go that Shakespeare in the Parking Lot had a lot of power to bring a community together.

Twelfth Night follows the misadventures of Viola (Amanda Dillard), a recently shipwrecked heiress who navigates the unfamiliar terrain of Illyria in masculine disguise. As “Cesario”, Viola comes into the employment of Count Orsino (Nathan Ramos) and quickly becomes embroiled in a love triangle with Orsino and the noble Olivia (Victoria Campbell). Hilarity and a happy ending, as only a Shakespeare comedy can promise, are inevitable.

This production, scrappy but charming, shines it’s brightest when it lets its goofy supporting cast wreak havoc. The clowns of Twelfth Night are some of the funniest characters in Shakespeare’s roster, and the comic players of this production attack the material with gusto. Andy Market gets a lot of laughs as lover-lorn nerd Andrew Aguecheek, while Mary Linehan makes Fabia a madly gesticulating New Yawker. Alessandro Colla’s turn as Olivia’s oft-drunk uncle Sir Toby is a delightful lush, and he is countered nicely by the grounded performance of Evangeline Fontaine’s Maria. Though not technically considered a “clown”, Dave Marantz’s Malvolio gets some of the biggest laughs of the night. The uptight character’s misguided attempts at wooing were a highlight.

My only quibble with the evening was the curious choice to replace some of Shakespeare’s archaic references with those considered more "topical." Employed mostly by the clowns, whom I mostly loved, these “modern” allusions were dated by a few years themselves (George Bush? “The internet is for porn" a la Avenue Q?) Those random moments marred otherwise strong, funny material and jerked me out of the action of the play. Perhaps I am a snob, but I am a strong believer in the potency of Shakespeare’s words, and to futz around with them betrays a lack of faith in the material. Of course, everyone else in the audience seemed to dig the anachronistic remarks, so maybe I’m in the minority. Maybe I needed to dial my snob down a little.

If the weather is nice and you want a no-frills, stress free night of theater, go check out Twelfth Night. Experience Shakespeare in the Parking Lot before it moves on to other paved pastures.

(Twelfth Night plays at the Municipal Parking Lot at the corner of Ludlow and Broome Street through July 26, 2014. Performances are Thursdays through Saturdays at 8PM.  Tickets are free to the public. Visit shakespeareintheparkinglot.com for more information.)