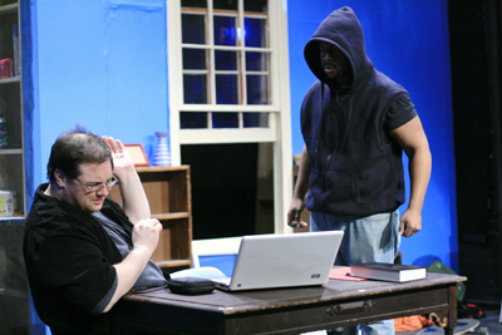 BOTTOM LINE: A bit of a modern take on Edward Albee’s The Zoo Story with a focus on what we truly deem valuable.

"Two men, two knives, one laptop" is the pitch for Theft at the American Theatre of Actors. Rich (Michael Bordwell) is a bit of a mess, throwing his phone and his wedding ring into walls along with his fists before collapsing on an air mattress for the night. His run down and empty apartment is broken into by an amateur burglar who agrees to wait for Rich to back up his laptop before stealing it. It admittedly takes a huge amount of suspension of disbelief to buy into anyone targeting this guy’s apartment for a heist, but Bordwell and James Harris Jr. as the burglar do an admirable job selling the situation with some help from the levity of Alan Hasnas’s direction.

Ethan Itzkow’s text is also a good mix of comedy and pathos, which helped me overlook the absurdity of the situation as well as the stereotype of a black burglar stealing from a dopey white dude. And Rich is most definitely the aforementioned ‘dopey white dude’ with clothes, dirty dishes and dvds strewn all over the floor -- not to mention the brilliant suggestion of smoking some pot to pass the time while the laptop backs up. And ‘Max,’ as the burglar agrees to be called, is equally stereotypical -- brandishing a knife and tossing out a variety of expletives as his first few lines.

But really, the piece is about more than the situation and as these characters interact more we get some insight into their relationships outside of the sordid apartment. The most enjoyable bits of the evening come from the stories they share -- the kinds of stories you’d only tell a best friend or a stranger you’ll never see again. They regale each other with tales of mushroom trips, clean-ups of massive drunken nights out, cheating on women, and the like. These stories are both funny and utterly grotesque; there’s no filter from Itzkow of the gory details, and it is this blunt approach which ultimately made me care about the two protagonists of the piece.

So, while Rich is going through a marriage falling apart, Max is on the verge of fully committing to his girlfriend. It is through this role reversal that Max realizes what is truly important to him and Rich is able to repent for the mistakes he’s made. Despite the unlikely connection formed by the duo, the stakes remain high and the payoff is fulfilling.