By Emily Schwend; Directed by Jay Stull
Produced by The Kindling Theatre Company

Off Off Broadway, New Play
Runs through 3.22.14
Walkerspace, 46 Walker Street 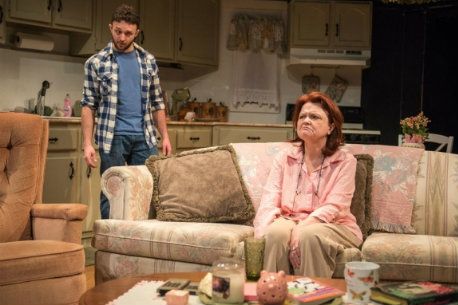 James Kautz and Charlotte Booker in Take Me Back.

BOTTOM LINE: A solid New York premiere by a gifted up-and-coming playwright, employing a strong ensemble of actors that examines the sometimes bleak landscape of the American Dream with doses of humor and pathos along the way.

The Kindling Theatre Company's new production of Take Me Back is bringing southern gothic drama to Tribeca's Walkerspace in a big way. Penned by rising playwright Emily Schwend, Take Me Back tells the story of Bill (James Kautz), who is forced to move back home to live with his diabetic mother after a four year stint in federal prison. He longs for a way out of Oklahoma, but is left with few options given the current economic climate and his past criminal record. How far is Bill willing to go to change his fate? Take Me Back is a slightly melancholic, nostalgia-infused tale, mixed with dark humor that examines the impossibility of the American dream when surrounded by nothing but minimum wage jobs, Wal-Mart, and fried food.

Take Me Back marks the NYC playwriting debut of Emily Schwend, whose plays have been produced at Steppenwolf''s Next Up Rep and the Humana Festival of New American Plays at the Actors Theatre of Louisville. She was recently awarded a year-long playwriting residency at Second Stage Theatre which will culminate with a production of one of her new plays to be presented at Second Stage Theatre Uptown in the summer of 2015.  Ms. Schwend has certainly made a splash in the New York City theatre scene with Take Me Back. While the scope is small, the writing is real, true, and robust. It is exciting and refreshing to see a young playwright who isn't afraid to tell the stories of the everyday struggle of those desperately trying to make ends meet and find some meaning in their hum-drum lives. Her characters are rich and complex beings looking for happiness amidst the stifling ensnarement of the Oklahoman landscape, where one seems to have anywhere and everywhere to go, but in reality, often has nowhere to go; where people live and die in small towns, contribute to their own demises, and are forced to relive the pain of past mistakes and accept the fact that maybe, in fact, this really IS all there is.

Schwend's powerful words are brought to life with great gusto by a small group of extremely talented performers under the restrained direction of Jay Stull. James Kautz, who is becoming one of my favorite NYC performers, does not disappoint as the prodigal son, Bill, who has returned home to care for his self-sabotaging mother, expertly played by Charlotte Booker, who captures the spirit of so many women of a certain age in a land where life seems to sometimes end when your children leave the house. As someone born and raised in Oklahoma, I would be remiss if I didn't mention the stellar dialect work by all the actors. Often, an Oklahoman accent is often portrayed as some sort of generic southern jumble of y'alls and fixin' tos, but the cast captures the subtleties and nuances of an often butchered dialect and made me nostalgic for my days growing up in Native America.

I loved Take Me Back. While it's not a perfect play, it's a damn good one and a great debut from a playwright who has great things in her future. Take Me Back is a poignant tale that will resonate with many and provides a sturdy platform to showcase a talented new playwright and a group of strong actors who work together seamlessly and deliver a satisfying evening of theatre that should not be missed.