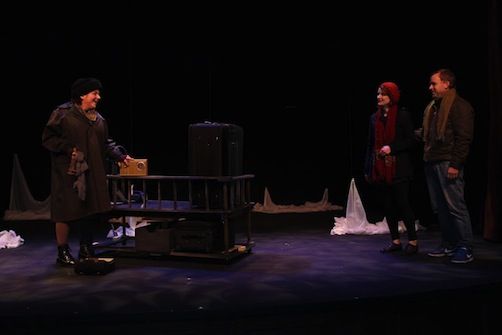 BOTTOM LINE: A story inspired by true event about a nearly impossible family.

I feel like I have gotten to know a little bit more about Georgia in the past week. The little Eurasian country with a tumultuous past was the subject of actor-turned-playwright Corinne Chateau’s The Sun Shines East, and my heart goes out to that land and its people.

Chateau attempted to adopt an infant from Georgia after the collapse of the Soviet Union, when the country was attempting to stand on its own shaky legs for the first time in years. She chronicles her experiences in her memoir The Road to Cali, a Journey to Motherhood, which provides the basis of her play. It is understandable that Chateau feels passionately about sharing her story and shedding light on the bureaucratic tangle that is international adoption. Her zeal provides The Sun Shines East’s greatest strengths, but also allows for many of its weaknesses.

Chateau’s onstage persona is Christine (Amy Staats), a New York-based actress who is making an earnest attempt towards an international adoption from Georgia. Unfortunately, she barely gets to spend three days with her intended daughter before political instability tears her away. The maddening process that follows puts strain on Christine’s relationship with her husband (Bristol Pomeroy) and sheds a harsh light on her sour relationship with her own mother (Mary Francina Golden).

I think because of the playwright’s attachment to the play’s subject matter some dramatic potential was never fully realized. Chateau exhausts so much energy pushing Christine’s agenda that it did need leave room for the story to develop organically. Perhaps the story works better as a book, much of the dialogue had a very literary quality to it. Chateau is not an experienced playwright, and perhaps an author with more finesse would have found a way to make the material sing. However, I still think I would like to read Chateau’s story. It’s a fascinating one that I want to learn more about.

I certainly want to know more about Chateau’s experiences while in Georgia. The play comes alive during the scenes set in Georgia when Christine and her husband are pushed out of their comfort zone. Much of this is due to Karen Christie-Ward's performance; she is delightful as Christine and Robert’s intermediary.  Christie-Ward invests her character with earthy, amiable energy, and her too-short time onstage elevates the entire play. I wish The Sun Shines East had focused more on the story in Georgia, if only to give Christie-Ward more stage time.

On the technical side of things, Alexander Bartenieff provides some very interesting Eastern pop tunes that give a unique flavor to the show. Meanwhile, the curtain-heavy set design by James Maloff is more effective in theory than in execution. The curtains raise or lower for each scene change, which means they either cut off whole parts of the stage or clump messily to the ground. It is distracting, and I don’t think the ethereal, dreamlike quality of the curtains fuses with the wrenching ripped-from-the-headlines realism of the play.

Still, The Sun Shines East is a story that is worth telling. Parents who either have adopted or are in the process of adopting will find the play emotionally resonant and worth their time. It is always worthwhile to hear these kinds of stories -- they help open the mind and expand horizons.