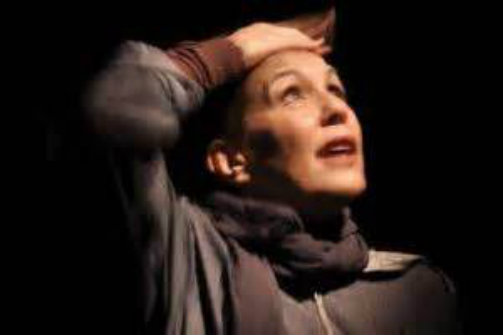 BOTTOM LINE: An Israeli show about a would-be terrorist and her own personal pain that may hit too close to home during a time of violence in Gaza.

Samira is a deeply emotional, earnest play about the battered psychology of a female Palestinian terrorist. It also has the misfortune of playing at a time when conflict in Gaza has destroyed the lives of many. With real bloodshed rocking the very region in which Samira sets its story, the play can be uncomfortable for many to watch, especially since its look at religiously motivated violence is mostly one-sided.

Samira (played by writer Anat Barzilay) is introduced at her interrogation. She has recently been arrested for an attempted suicide bombing that left one little girl dead. Officers barrage her with questions and show her videotaped interviews of her friends and family, breaking Samira’s fragile defenses and laying bare the events that led to her attempted attack. It becomes clear as the interrogation continues that Samira’s act had less to do with idealogy than with desperation.

What made me uncomfortable was the insinuation that every tragedy in Samira’s life was a direct or indirect result of Muslim dogma. I don’t want to bring up my own personal faith or politics in this review (your own beliefs will likely flavor your opinion), but I did feel at times that Samira’s struggle was so heavy-handed that it made the play too manipulative to be properly moving. Samira’s abusive husband and bullying mother-in-law are such broad characters that they nearly slip into caricature. Samira has noble intentions but offers a narrow view on Islamic life that makes its drama feel only half-realized.

Where Samira does succeed is showcasing Barzilay’s talent as an actress. Barzilay’s performance is emotionally raw, vulnerable and beautiful to watch. She carries the weight of Samira's despair on her slight shoulders and gives the character strength as well as tenderness. Her strong dramatic work is especially impressive as the only actors she has to work off are the pre-recorded, wooden-sounding voices of Samira's interrogators. The videotaped segments are also not as effective as they should be. Much of the acting from the taped actors is too stagey and feels a little awkward on film. It would be a much more interesting play if Samira had actual, live human beings to interact with, rather than disembodied voices and images.

I would say that Samira is worth seeing for Barzilay’s performance, but the content of the play left me feeling conflicted. If you want to see strong, emotionally-connected acting, Samira is worth your time, but for an engaging discussion on religion and politics I would look elsewhere.