A Snowfall in Berlin 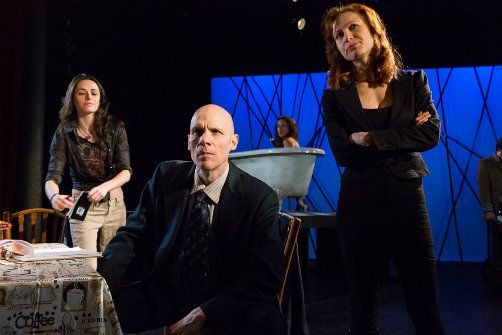 BOTTOM LINE: A Snowfall in Berlin is a meticulously woven look at an ensemble of misfits and the line between art and reality.

At a beautiful little theatre on the Lower East Side, NyLon Fusion Company is presenting Don Nigro’s new play A Snowfall in Berlin in rep with John Patrick Shanley’s The Big Funk. Don Nigro’s world premiere play was written for NyLon Fusion as a response to the themes of this Shanley play.

A Snowfall in Berlin tells the story of an investigation amidst a diverse group of ex-patriots making an independent film. A detective invades the small cast and crew when the young actress playing the girl who dies in the bathtub in fact dies in the bathtub. The more the detective uncovers about this ragtag group, however, the more confusing the facts become, and the more the line blurs between film and reality, detective and suspects.

Nigro’s language is beautiful. The dialogue flows, layers, and overlaps creating a dramatic poetry that washes over the audience. The eccentric characters are distinct and fully realized despite their stock roles. Among the many philosophical touchstones of the text, I was particularly drawn to a poignant discussion of competence versus genius. Nigro’s play juxtaposes universal truths with modern delusions in a way that illuminates our current culture that houses both.

NyLon Fusion brings together a stunning ensemble of remarkable actors for this intricate play. The commanding and statuesque Tatyana Kot leads the cast as inspired but controlling director Natasha. Eric Percival is charming and pitiable as the self-loathing lethario. Brandi Bravo brings mystery and innocence to the late Rosa, Don Carter is relentless and repentant in turn, and Stephanie Heitman plays the “eternal best friend” Megan with mystery and cunning. All the while Jessica Vera threatens to steal all the laughs as the boozy, brassy Emilia.

Director Shaun Peknic maintains the entire cast on stage for the duration of the show through subtle staging and expert use of the lighting and set. Wilburn Bonnell’s nuanced lighting plays a prominent part in the production, both in highlighting moments and as a tool for characters who maneuver lamps onto each other in key moments. Peknic’s work is immaculate, bringing together a flawless production to further Nigro’s dynamic script.

This show isn’t Oklahoma, but for audiences who enjoy playing with time and space, the line between reality and story, and the tropes of film noir, come along and enjoy the ride. This is the kind of play you have to trust; sit back and let it take you where it wants.