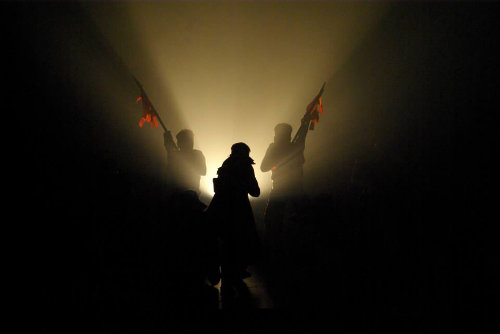 A scene from The Princess Pyunggang.

BOTTOM LINE: An age-old Korean folktale about human destiny is given a rough but enchanting new production.

One of the pleasures of the New York International Fringe Festival is getting the chance to test the “International” part. Where else in New York can a Lebanese talk show parody, an existentialist anti-censorship rant from Romania, and a Singaporean exposé on online match-ups all have equal shots at box office success, as has occurred over the last 18 seasons of the Fringe?

This year, one of the most far-flung of the festival picks is a rough-around-the-edges, yet delightful production called The Princess Pyunggang, a collaboration between two Korean companies, one based in Seoul, the other in New York. The story is an ancient folktale about a princess (played by the show’s adaptor, Sookyung Hwang) who, defying her father (portrayed by Seongtaek Kim), marries Ondal, a simple fool (played by the thoroughly adorable Kyuwan Lee), then transforms him into one of Korea’s greatest generals.

Director Jongyeoup Lee (I’m using name spellings, by the way, as they appear on the show’s publicity postcard) oversees an interesting hybrid of traditional dance, martial arts, ritual drumming, Western opera, Korean pop, mask work, and puppet theater. Chief among the crowd pleasers is Ondal, played by Kyuwan Lee, a young Korean performer with a shaky grasp of English pronunciation but a monopoly on comic charm and a thrilling mastery of martial arts and stage movement.

The technical aspects of Princess Pyunggang run the spectrum. On the one hand, the sound system is faulty even by Fringe standards, but the uncredited costume design is eye-poppingly effective. The Korean pop-infused score by Dalnim Lee is uninspired. But the drumming lifts you right out of your seat, and a brief performance by Yoonsook Park on the kayagum, a zither-like stringed instrument, nicely grounds the story in its tradition of Korean folklore.

And although a few of the projection images that appear upstage are painfully amateurish, others are stunning, such as a beautifully conceived, black and white sequence in which Ondal battles shadow warriors who disintegrate into puffs of smoke whenever he slays them. It’s Korean ritual drama in the age of Xbox.

For some reason, the Fringe doesn’t promote this show among its recommendations for young audiences. And there’s little in the show’s postcard suggesting that it should. But the word was out to a few kids at the recent performance that I attended and they all had a wonderful time.

(The Princess Pyunggang plays at the Sheen Center’s Loretto Auditorium, 18 Bleecker Street, through August 17, 2014. Remaining performances are Thursday 8/14 at 9:45PM and Sunday 8/17 at 6:30PM. Tickets are $18 and are available at fringenyc.org. For more info visit facebook.com/BibimbabTheatre.)