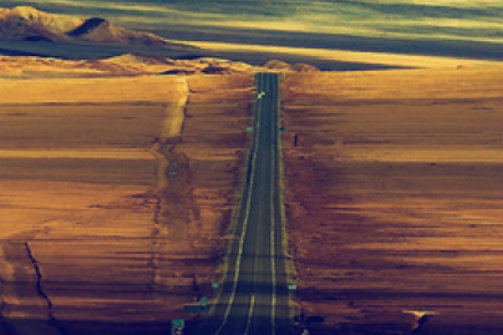 BOTTOM LINE: While an honest effort with some fun moments, this play lacks a logical narrative.

In William S. Yellow Robe, Jr.’s re-crafted version of David Seals’ 1979 novel, Powwow Highway, we are transported to a world where you have to believe in yourself and your family, be strong, conquer fear and doubt, and go with the flow to follow your destiny.

Bonnie Redbird (Tanis Parentau) gets arrested in front of her two children on charges of drug possession with the intent to sell. The police say that they find the drugs in her car, but it’s implied that drugs were planted there by either a no-good boyfriend or the government to set her up. After she is taken to prison in New Mexico, her brother Buddy (Dylan Carusona) and “Fat” Philbert (John Scott Richardson) travel from their Cheyenne reservation to bail her out with money Buddy has from his tribe, money that is supposed to be used to purchase buffalo.

Aunt Harriet (Donna Brooks) plays a sage mystic and matriarch of the tribe. She has magical abilities which include getting Philbert’s jalopy to work (by pointing her cane at it) and astral projection. She can appear to loved ones and can talk to spirits. She seems to be connected to all realms in this life and in the hereafter. She’s wise and trusted, so when she tells Philbert that he must accompany Buddy to New Mexico because it’s something he MUST do, Philbert listens.

Philbert is large, sweet, and a little bit flaky. Buddy is handsome, very down to earth, and carries the weight of the world on his shoulders; nevertheless, a friendship develops between the two as they travel in Philbert’s “Pony” (his car’s nickname). There is a bit of a hiccup when Philbert travels hundreds of miles out of the way to sacred land to pray for guidance, but Buddy quickly forgives him and they travel on.

Philbert and Buddy eat junk food and joke around throughout their journey, which is a stark contrast to the reality in which Bonnie is currently living. She’s constantly beaten by the police just for being American Indian, she can’t see her children, she’s being tempted by an evil spirit to give up, and for some reason her bail keeps increasing. It goes from $5,000 in the beginning of the play to $20,000. In the end, it turns out that the bail amount is of no consequence. Philbert uses magic gifted to him by his ancestors to spring Bonnie out of prison.

This is a very difficult play to believe and follow and it’s not because of the magical undertones, but because the plot jumps all over the place and I was constantly confused by many of the actions of the characters. Bob Jaffe gives a grounded and polished performance as the haunting Pale Man. The children are also adorable: Autumn Peters as Jane and Wyatt True Ash-Milby as Sky. The costume design by Lux Haac seems perfectly effortless.

While overall the play is sadly disappointing, it is a real treat to hear and see some authentic sounds and customs of America’s native people. Modern theatre is starved for American Indian stories. It’s a disgrace that we hear and know too little about American Indians because we’ve either killed them off, forced them into suppressed seclusion, and/or proved ourselves to be too un(trust)worthy. This is important to keep in mind, because as an audience member you may be asking yourself, ‘Why don’t they just go to a lawyer?’ Because the white man and his systems are not to be trusted.