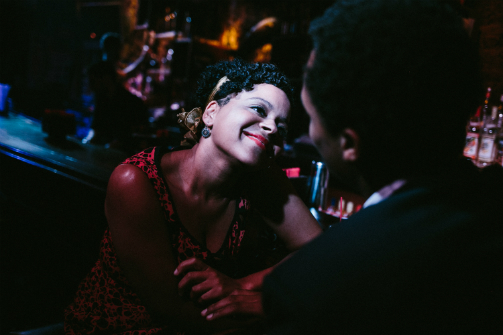 The evening starts out the same way many young adults start their nights -- you enter a nightclub, have your ID checked by the doorman, and are led through the dimly lit, music pumping, multi-floor Fat Baby bar to your seat. You order drinks, open a tab, and socialize with your friends and with strangers. Not unlike any night out, you notice the interactions and situations happening around you -- an awkward introductory conversation between two strangers, patrons sitting alone engrossed in their phones, a tired couple smiling at each other through gritted teeth.

As the show begins, some of these situations emerge to take the spotlight -- with the guidance of expert sound design by Marcel Añez and crafty lighting by Ryan O'Gara, audience members are given full permission to follow their voyeuristic inclinations and observe the personal conversations around them. There's a lot going on, with multiple interactions happening on each of the three levels at Fat Baby at every given moment, sustained by an 18-person ensemble that plays over 40 characters with impressive versatility. The scenes and interactions are short plays written by 17 different playwrights, and are often funny, awkward, relatable, and sexually charged enactments of the unpredictable New York dating scene. There are break-ups, first dates, jilted lovers, and many other well-played portrayals of modern romance, and audience members are free to float throughout the bar, observing whatever they choose.

In addition to the dynamic scenes that unfold between multiple characters, PLAY/DATE makes magnificent use of technology to convey how phones have come to play an integral role in many people's dating lives and relationships. With each poker-faced character sitting alone on a cellphone, a screen above their heads provides a tech-savvy real-time visualization of the conversation taking place, with hilarious, graphic, personal, and sometimes touching and intimate depictions of the connections we foster through our screens.

With tickets for PLAY/DATE priced at a reasonable $30, this fun and unique immersive experience should be on everyone's radar for an alternative night on the town. Whether you go alone, bring friends, or go with a date, PLAY/DATE promises a highly entertaining and one-of-a-kind social and theatrical experience.

(PLAY/DATE plays at Fat Baby, 112 Rivington Street, through July 30, 2014. Performances are Sundays, Mondays, Tuesdays, and Wednesdays at 8PM. Tickets are $30 and are available at ovationtix.com.)