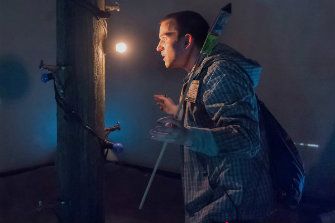 BOTTOM LINE: A captivating and unrelenting story of an outcast told through a dexterous solo performance.

Harry Melling is most known to the world as “Dudley Dursely” from the Harry Potter films. He has come a long way from the chubby ignoramus cousin of the boy wizard. The British actor has been wowing audiences for years on stage in the UK, and almost stole the show from Frank Langella as The Fool in the recent incarnation of King Lear at BAM. Now, his compelling solo play, Peddling (which Melling wrote and is the sole performer) has been brought to the States as part of the 10th annual “Brits Off Broadway” series at 59E59 Theaters.

Coming off a childhood as a film actor, I doubt Melling has had much personal experience with the struggles of his character, known simply as Boy. Still, his fascination and passion for the life of a begging peddler is evident in his sheer commitment to the vigorous role he has created for himself. A peddler is more of a British term, but just imagine the Welch’s fruit snack-selling teenagers from the NYC subway going door-to-door in upscale suburban London. Melling’s compassion, empathy and understanding of the life are contagious even if they’re a bit pushy at times -- much like his character.

The play is Melling’s defense of the teenage miscreant often dismissed of pity by society during that stage of life when the world no longer sees you as a child, yet you are far closer to childhood than adulthood. At 19 years of age this orphan has gone beyond the age of help. The play may also be Melling’s scheme of creating a role for himself that sheds his own skin allowing him to appear grotesque, visceral, and acrobatic as an actor. Luckily these are some of Melling’s strengths in performance as he whizzes through the rhythmic dialogue determinedly. His refrain resurfaces like slam poetry throughout the play:

“going house to house,
door to door -
knock knocking -
professional doorstop hopping,
hoping that someone might show an interest.”

We first see Melling’s Boy in the aftermath of a rough night. He is burnt, in his underwear, and surrounded by items that serve as clues to help him decipher how he got there. The play then follows him retracing his steps from the previous day up to this point and beyond. He navigates “through the north London maze of tall hedges” knocking and hoping someone will take pity on him, and then purchase an overpriced roll of toilet paper. We learn he is from a “young offender’s” home in which his boss drives a group of the boys out in a van to solicit and picks them up hours later. They deliver the money and in return they get food and a bed.

The Boy is a yearlong “trick-or-treater” as he attempts to commit small-time property damage to those who do not make a purchase, or at least distinguish him as a human being. When he stumbles upon the home of one of the authorities in his life who decided upon his fate he is infuriated when she doesn’t recognize his face or know his name. His hunt to discover his identity is ignited by his anger and a firework that is akin to a WMD in his mind. This journey leads him back to the hell in which the play began and to a place of new beginnings.

Director Steven Atkinson and his designers make remarkably acute theatric decisions time and again in the play that are in perfect union with the writing, creating visuals that will stick in the mind. The tight claustrophobic world of the play is captured perfectly in the design. Lily Arnold’s set gives hope to all New York apartment dwellers in displaying just how much can be made out of a 10x10 square space. Her design encloses Melling in a translucent square mesh curtain for about 90% of the play. Azusa Ono’s precise lighting provides the smoke and mirrors. One of the more poignant moments of the play touchingly personifies a single light bulb as a young girl.

There are moments where you detect Melling’s own unrefined angst and self-consciousness as a writer. He lays out a few metaphors a bit baldly -- but with such a fierce and earnest performance it doesn't really matter. The dexterity of the wordsmithing is a joy to listen to. His physicality is intoxicating, aided by the relationship of the audience to the actor due to proximity.

At a swift 50 minutes, the production is a nuanced sprint from the start. Peddling is an astonishing first play by a young writer with a great capacity for poetry and the language of theatricality. It’s hardly fair he’s such a talented actor on top of all that.