By Will Eno; Directed by Oliver Butler 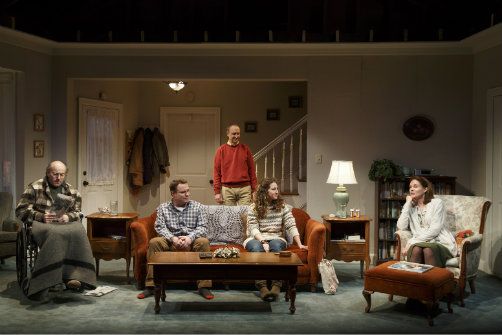 Families take on a new form when all members are adults and there's not a small child to capture everyone's attention and give everyone something to talk about other than their lives. These little creatures can help families get by for years by skirting around judgmental comments or underwhelming responses to major life events. In Will Eno's new play The Open House, premiering at The Signature Theatre, he examines that moment in the chronology of a family stuck in a stagnate rut. In this case, that examination is also brilliantly humorous and sardonic.

In his "Enoesque" way he once again looks at the routine of life with a metaphysical and cosmic lens. With pitch-perfect versatile performances, and sharply restrained direction by Oliver Butler, this premiere  manages to keep its distance while being emotionally impactful. Eno does this by delving into the layers of a domestic dome -- a theme visibly echoed by literally peeling back the wallpaper.

The living room, smartly designed by Antje Ellermann, is like every living room you've seen onstage to the point that it lacks any personality. And yet, it gives an initial response because it is the "everyhome." It's the Hallmark greeting card living room. There is evidence of prior life in the scuffs on the walls and the toys and games hidden in the closet, but mostly it's a space for a couple of empty-nesters to watch time pass. This initial acclimation to the onstage world is vital in the intimate Rolulus Linney Courtyard Theatre at Signature. Akin to Clybourne Park this house plays a major role in Eno's script.

There's a glimpse of the loneliness that the verbally abusive father (Peter Friedman) and broken mother (Carolyn McCormick) deal with on an average day at the top of the play. In a flash of darkness the other members of the family fill in the negative spaces with a son (Danny McCarthy), daughter (Hannah Bos), and uncle (Michael Countryman). The family has gathered because Father has had another stroke. The dog is missing and there's no access to coffee or tea. What does a family do when forced to sit and confront each other?

The family relations go from semi-normal to strange to unreal slowly through the first half of the play. Father lets loose a barrage of piercing statements delivered unnervingly deadpan by Friedman. To his unmarried daughter who insists she's "fine" with her life he says, "Maybe some young man makes you feel like you are, briefly, but, late at night, by yourself, you know it's not the case." Eno always maintains the archetypes on stage to the point that the characters themselves are almost knowingly trapped inside of the play.

Son and Daughter try to help and create change while Father cuts them off at every turn. Mother is a broken record saying the things mothers ought to say while the fantastic McCormick gives the character a deeply vacant gaze. Uncle is perhaps the most compassionate character of the family, but because of his depression over his lost wife and alcoholism his status is slightly higher than the dog's -- maybe not even that.

And then change does come. It comes roaring into the room full of life and action. To say much more than that would spoil a primary joy of the play. While the tone of the play is full of spite, sarcasm and hopelessness, there are a lot of truths said that will resonate with anyone who has every had any type of a family. These people say the things that go unsaid for decades in most families, all in the course of about an hour in a living room. While blunt in tone, Eno manages to pack the play with nuances that ring on multiple levels.

With Eno's Broadway debut, The Realistic Joneses, coming this Spring, The Open House is a welcome opening act. It is also a perfect opportunity to see his work done in an intimate setting by a crackling cast of smart actors. The final surprise of the play made my heart jump and somehow erased all of the bitterness that escalated on stage throughout the play. Eno accomplishes this using a distraction tool that has probably kept more families together than we care to admit. In any event, you'll be thankful you still have more time than a one-act play to enjoy those closest to you before the changes come.