No One Asked Me

Off Off Broadway, New Play
Runs through 8.22.14
Flamboyan Theatre at the Clemente, 107 Suffolk Street 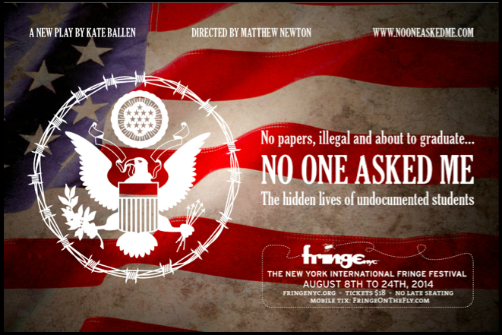 BOTTOM LINE: A heavy and important exploration of a controversial topic that is somewhat hindered by underdeveloped characters.

No One Asked Me revolves around three undocumented teenagers living in the Bronx. Daniel (Cornelius Franklin) is a teenager from Africa whose father promised him, his mother, and his sister papers. Unfortunately, it turns out that his father lied about the documents and has returned to his home country to marry another woman. Alyssa (Alaina Fragoso) is a Peruvian girl who is her class Valedictorian and wants to pursue a medical career. Sophie (Octavia Chavez-Richmond) has been passed around among apathetic relatives after her father’s incarceration in the Dominican Republic. Despite a teacher who sees their potential (Terra Mackintosh) and a world-weary yet compassionate immigration lawyer (Gary De Mattei), the three teens face an uncertain future -- will they pursue the American Dream and attend college, will they be deported to their home countries, or will they turn to a life of crime in order to survive?

The plight of young people who are illegal in the country they live in through no fault of their own is incredibly relevant today. Playwright Kate Ballen has much experience in the subject -- she has worked as a counselor at a Bronx high school, helping many undocumented teens navigate the immigration and college process. Her writing shows passion and knowledge about the topic. She also drops a few quick but stinging insights on the immigration system, immigration laws, and the academic performance of immigrants vs. U.S. citizens.

This isn’t a show for those who prefer a light comedy. While the characters express much hope, their story is a heavy one, with very few laughs or moments of joy.

Personally, I was disappointed with the lack of character development in the piece, particularly for the three main characters: bright, young teenagers who could have everything taken from them in a second. Although I was sympathetic towards their situations, I never felt that I knew much about them as people. In spite of these qualms, this is a good place to start if you’re looking to know more about the plights of illegal youths.

The actors have many fine moments -- Octavia Chavez-Richmond scores a few laughs at the cynical Sophie, Jihan McKenzie has a moving turn as Daniel’s sister Simone, and Gary De Mattei turns in a fine performance as Isaac, the immigration lawyer. The entire cast is clearly devoted to sending out this play’s message of acceptance, and indeed this is a message that needs to be heard. If the characters and their relationships can be fleshed out more, No One Asked Me will been a very satisfying drama.